Been a long time coming as an original IXO release too! I've been waiting for one since 2010 and have ordered one this lunchtime! Hurrah!

I've got a set of Vitor's decals which I haven't used yet, so will have to do some thinking before letting loose with them, perhaps using a second car as a base model and "Code 3'ing" it with Vitor's decals of delight!

Cheers and enjoy (I know I will!), Steve

I received my RAC116.13 Teesdale 86 RAC Rally model this morning, and it is a really nice addition to the collection - especially alongside Vitor's 86 New Zealand Rally version!

I have looked at it closely, and it appears that the roof, rear arches, door pods, front spoiler 'pigs ears', and front bumper corners are all sprayed red, whereas the front wheel arches down to where they meet the front bumper, are decalled. Other decals appear to be : Lombard (roof & doors), Shell Oils (bonnet humps & rear arches), Lombard RAC event plates (bonnet & rear window), red block (bonnet), crew names (front wings), etc... The graphics on both front and rear spoilers appear to be completely tampo - as per previous models.

Front mudflaps are also a nice addition for this model, as I do not recall seeing them on any previous IXO model?

I'll get some photos of my own version uploaded over the weekend, but in the meantime, I'll just repeat this from Post #1... 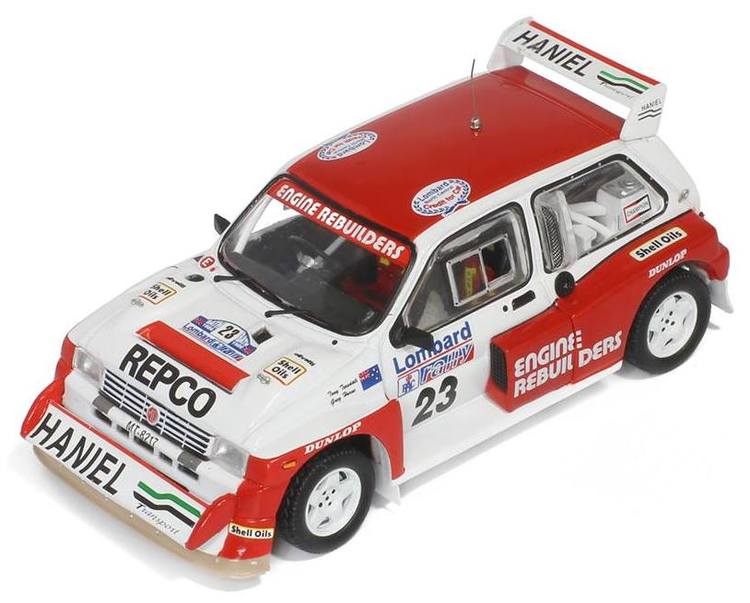 , and a little less space between them in my display cabinet!

Would be interrsted to know what you paid - no plans to buy one but
German sites are selling for eur32.95, grandprixmodels (always top end/rrp) are selling for £39.99 - which was the supposed "new" IXO standard price. Is it only us poor Brits who get the pain of the IXO price hike?

Zeus wrote:This could be a possibility

Was it Steve, and what do you think, or will you have to wait for another day?

Well, that's between me, the seller and Paypal, Paul!

Put it this way, there's certainly better offers out there but I had a certain allegiance to the seller as he's been good to me, so I felt duty bound to give him my custom in return! See, I'm a good, honest, decent and loyal person after all!

Zeus wrote:This could be a possibility

Was it Steve, and what do you think, or will you have to wait for another day?

Doh! No, there was a small cardboard box but it had come from Holland, not GPL, who did me a VERY good deal! The contens were a rather special Austin A35, not the 6R4. Maybe tonight!

Pleased to say there was a larger cardboard box waiting for me this evening.

The model is very good. Lots of lovely detail, though the ENGINE REBUILDERS decals don't line up very well down the sides. Maybe the car was like that originally? Ermmmmmmm?

Would be odd if it was!

The door mirrors are very good - Clubman/ road car stylie, rather than the more usual International style, which is common on models but increasingly rare on the full size cars!

Would be neat to get a large supply of the door mirrors, perhaps as a bulk buy through the forum. I'd be up for ten pairs straight off!

The only slight disappopintment, apart form the flank decals, was that I couldn't get the body off the chassis to remove the superfluous A frame roll cage plastic. The triangulated screw turned but didn't let go, and now turns pathetically, doing diddly-squat (apart from windng me up!

Hope you guys ejoys yours when you get one.

The 'Engine Rebuilders' logo down the nearside is fine on mine, although there is a vertical gap where it splits across the panel line between the door pod / rear wheel arch, but my 'Repco Engine Parts' logo down the offside is out of vertical alignment!

Still nice to have another addition to the collection though.

I always put a gap in the decals between the door pod and wing, as that's what happened on the cars themselves. Some careful cutting of decals is needed, but I've managed a better job than our Teesdale cars have had with theirs! Oh well, not the end of the world!!

Dave, I was thinking along the same lines.. so long as I can get another IXO for a reasonable price that has the decals lining up properly.