Any Forum members know much about Mould making?
Would like to try it to make a few light pods and things?

There are a few demos in youtube etc. im very interested in this as i have bought a model i want to take casts from. If there is anyone with experience of this id be happy to pay for them to do so.

I seem to think that Brian might have 'dabbled' with this in the past, as I also asked a similar question a while back, but maybe that was on the old forum?

Anyway i have a browse on youtube and see.

Ive made a few moulds and cast from them, but need more practise at it before i could sell anything.

Casting diecast is much more difficult than resin which is what i used. Once you get a good mould of your item your casting its not too difficult after that, but making a good mould needs a lot of thought put into it
_________________
Always interested in 1/18 Irish Decals/models

Hey! This is a much more interesting thread than I feared! I was expecting siomething about cheese making or old food!

Interesting -hadn't thought of making moulds and recreating..... what are the moulds made from and can they be used multiple times? Or just the once after which they're destroyed? What do you use to make the model from the mould you're created?

So it was you Brian!

The method i used involved a solicone mould that can be reused many times. Its very flexible to get your casted parts out so is pretty good at releasing the casted part.
_________________
Always interested in 1/18 Irish Decals/models

That certainly seems to be the suggested route of choice based on the youtube video (resin cast from a silicone mould) And im 99.9% certain its the approach realcarmodels in hungary use.

Yes this stuff looks the business but it is very expensive
But a good video all the same.

That's the thing about a mould if the fill hole is in the wrong spot the part might never come out in one piece.

brian wrote:Ive made a few moulds and cast from them, but need more practise at it before i could sell anything.

Casting diecast is much more difficult than resin which is what i used. Once you get a good mould of your item your casting its not too difficult after that, but making a good mould needs a lot of thought put into it

did you find any of casting small parts?

There is one for casting wheels on youtube and i think the same principals will apply) or, depending on how intricate it is, couldnt you just sink it in a pot of silicone and then cut it in half?

Sounds feasible! Must get up to speed with this, as there is a whole world of possibilities out there!

I guess other small parts to make would include extended wheel arches to enhance standard models and front and rear spoilers to do the same?

Thanks for posting the links. Cheers, Steve

My first (messy) attempt at casting - will be interesting to see how this comes out - the use of Lego was recommended to me by a local model shop and I've seen photos of a pro-builders casting table and he uses Lego as well. Too many bubbles I fear, but lets see how it goes! The base is a very rare meri kits gwyndath evans rs2000 - i need some castings for a couple of plans - i want to make another rapid fit version as i have a spare set of decals and interior, and once i have the first couple of castings done the plan is to modify the front for a version of the rs2000 which evans won the BRC in - and then i want to run off some road car versions for my RS collection - at least, that's the plan.........

As i type this the bubbles on the surface are nearly gone. For reference, allowing 1cm around the sides and on top results in a 300ml requirement for this stage (used dry rice first to measure the amount of silicone i needed to avoid wasting any). Once set, i need to remove the plasticene from the model, invert the mould, add another centimetre of Lego and poor a second fill to make the two part mould. Then it will be casting time and its probably only then that i'll be able to gauge whether my first time efforts have yielded a shell which i can use. 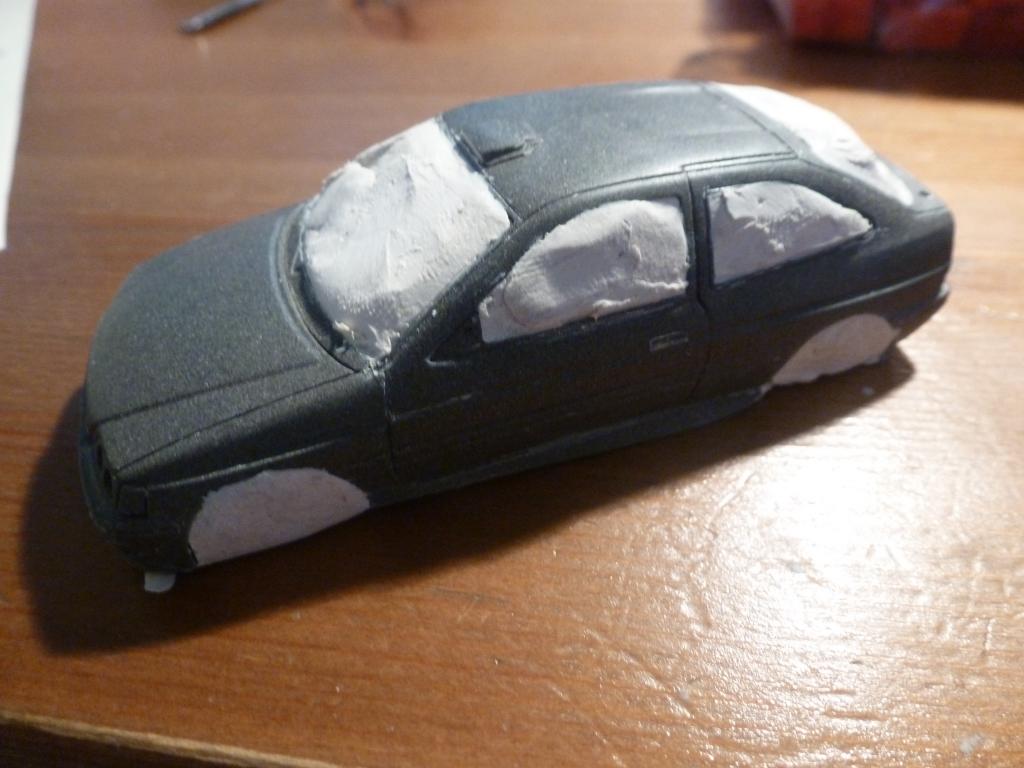 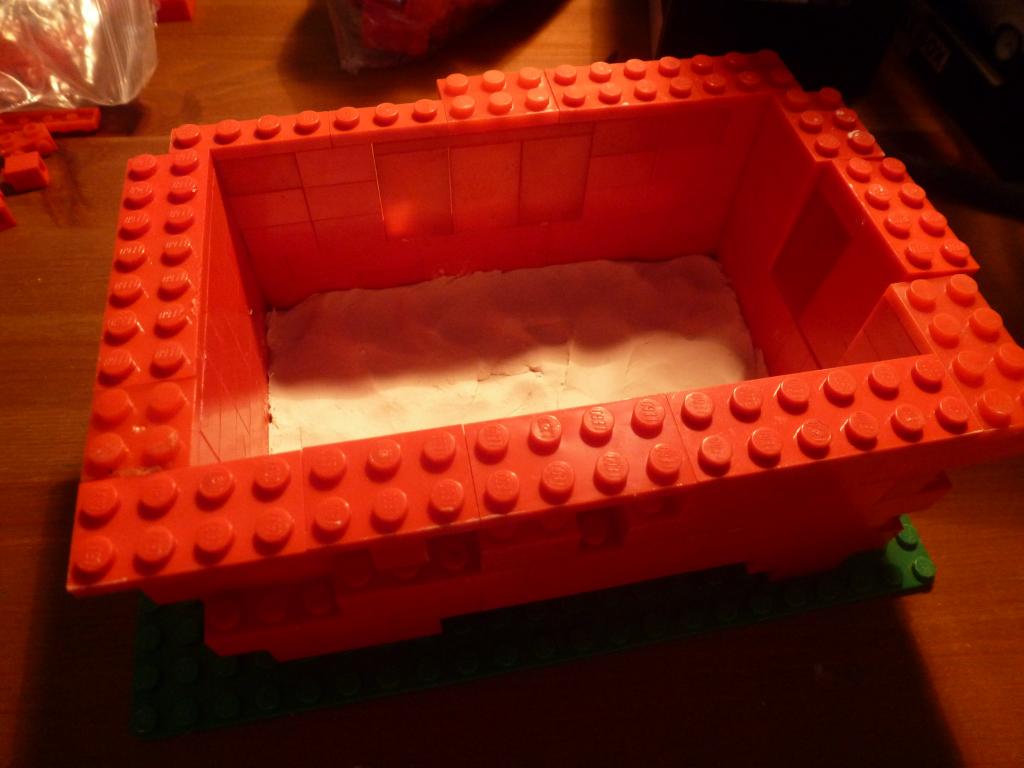 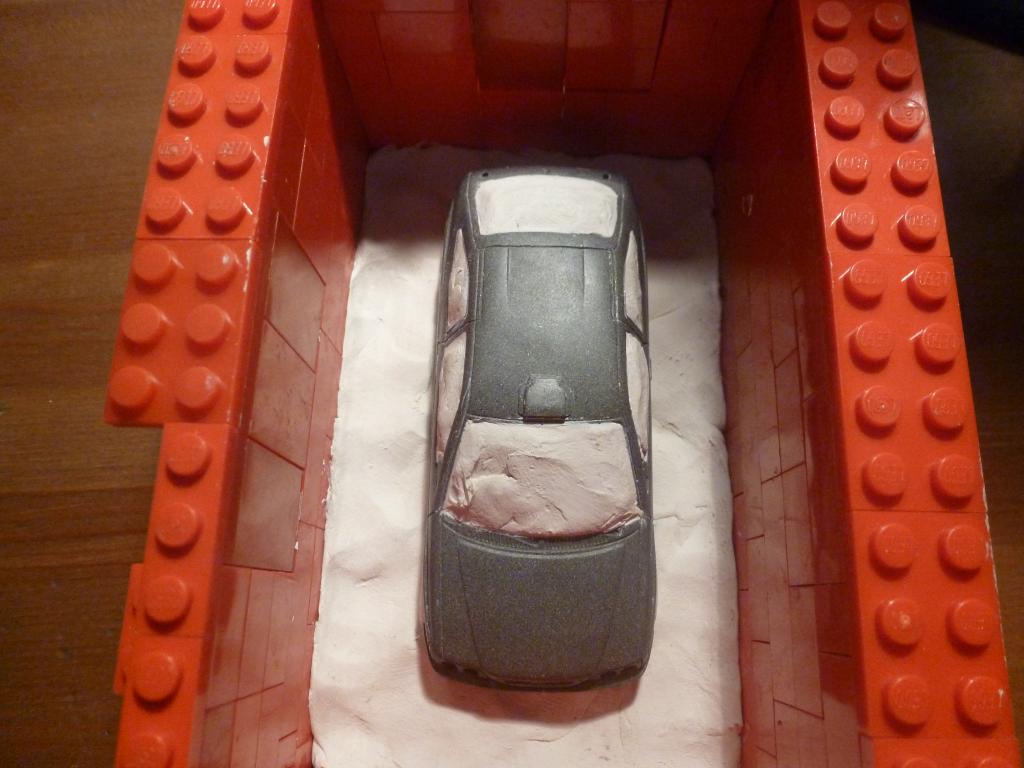 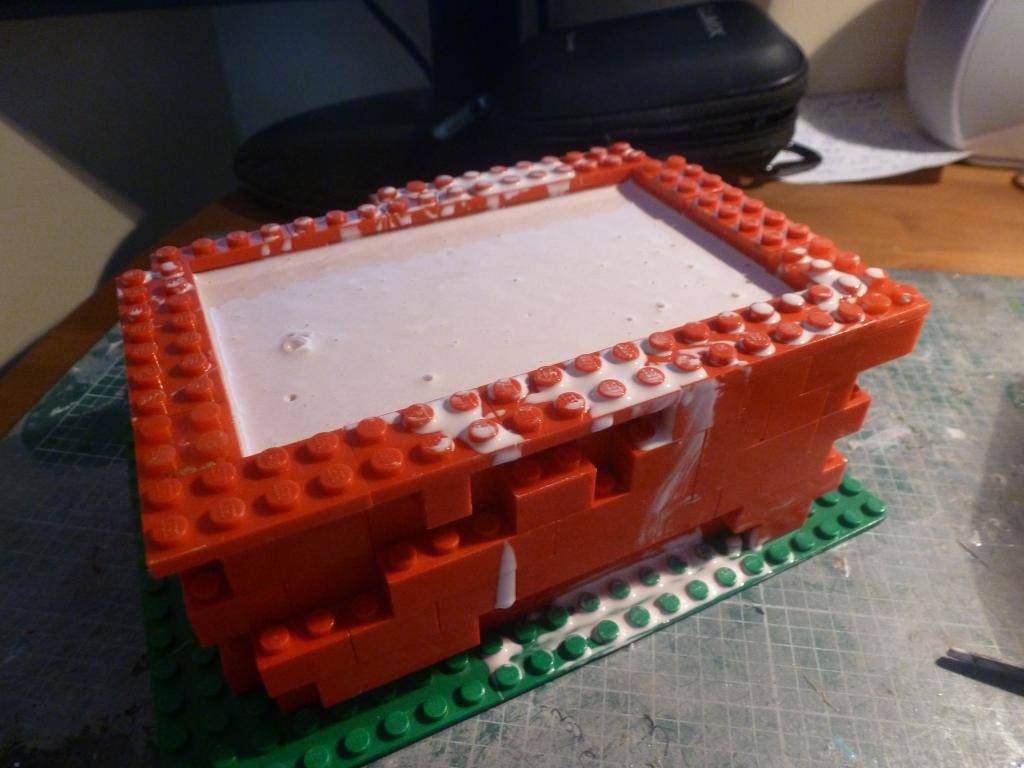 Looking good. I have used that polycraft stuff myself but with little success. I dont have the patience to wait 24 hours for the mould to cure only to see that Ive done something stupid and ruined it. One the plus side you can cut it what is ruined and reuse to fill empty space around the item

Okay, i know its still early stages, but i "broke open" the mould this evening. Detail is immense! I know i shouldn't be surprised, but i've impressed myself with how much detail you get on a silicone mould. Anyway, emptied the plasticene, flipped and rebuilt the lego surround, poured the next layer (175ml this time). First potentially catastrophic mistake. I didn't use a release spray which some people say is essential to separate the two parts of silicone, others say wet silicone wont stick to fully cured silicone (left the first set for 36 hrs).

I'll know in another day+ I suppose: 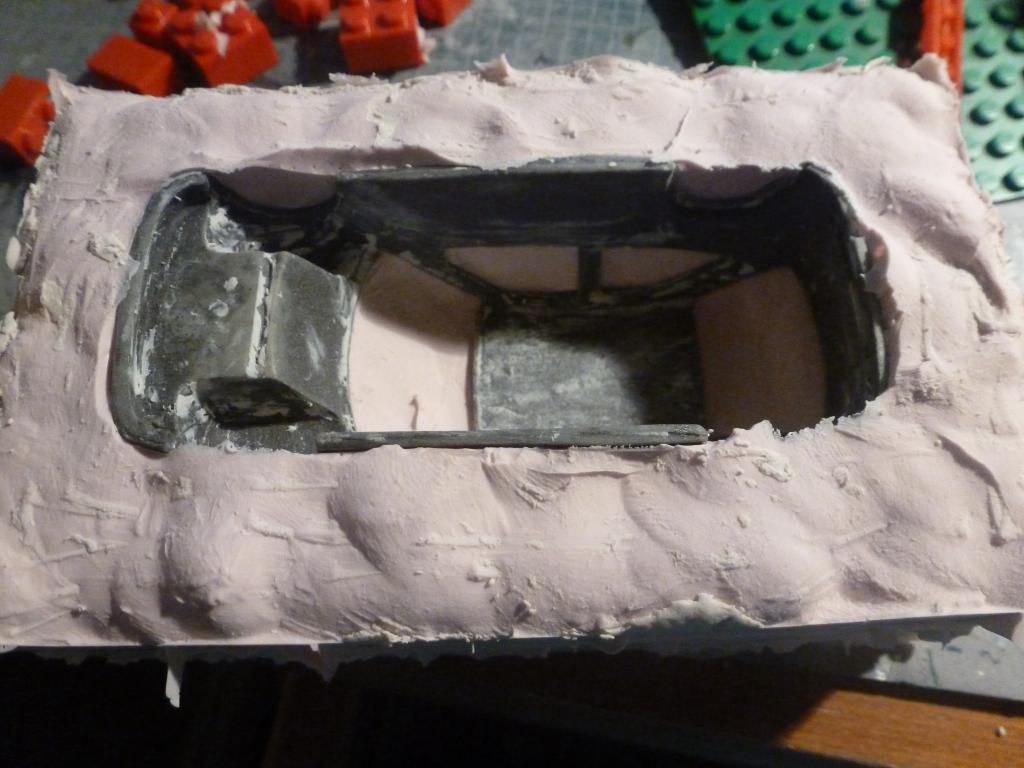 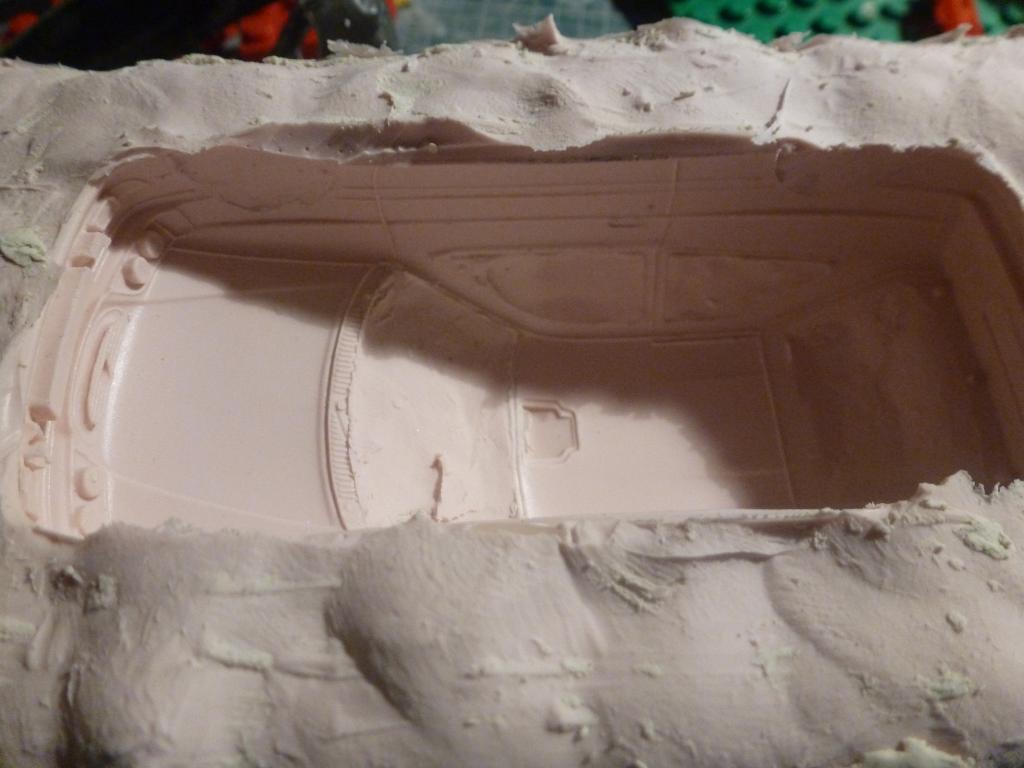 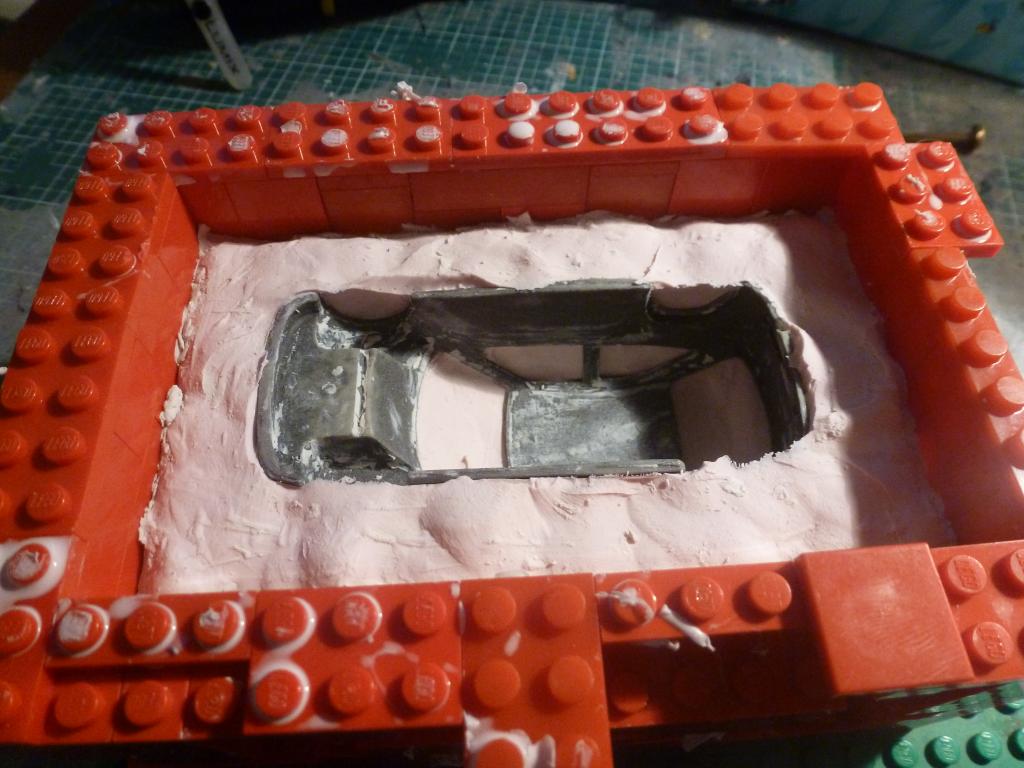 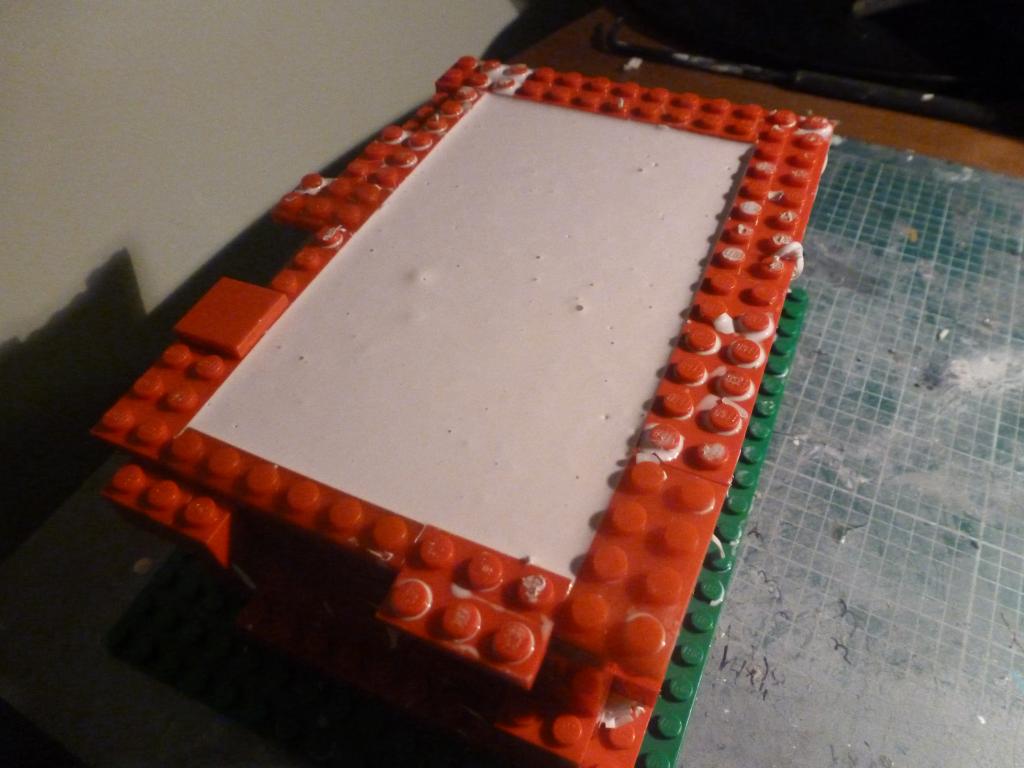 Fingers crossed for you!!!

I've watched soem of the videos on YouTube about this and it does seem incredible what you can create/ replicate in these moulds. I'm feeling tempted myself, but can't imagine when I'd get time to do this. Didn't stop me looking up the materials on eBay though!

I like the last photo of the refilled Lego - what wonders lie beneath? Tune in tomrrow and find out!

Really hope im wrong but I think you will have trouble seperating the mould. The stuff I used needed the release spray to ensure one side didnt stick to the other. Otherwise it fused with the first part. If this happens, you will need to try cut out the model by destroying the second part of the mould.

I know mine never worked properly, but i did learn a few things form every mistake.

When your first mould is finished and your turning it over to remove the plasticine , try to keep the model in the first mould. If you remove it, it may not sit back in the right way and even if it does, some of the detail may not fit back the way it should and you run the risk of any gaps being filled by the second pour. I ruined 2 moulds this way.

When making the first mould, try to make some guide holes that you can to use line up the second mould. If you dont, getting the second part to sit exactly where you need it will be very tricky. You might end up with a resin model thicker on one side and too thin on the other. While i did this, You would need to use something better than I did as mine flexed to much

Plan out where you will fill the mould from this is very important. Something like a diescast car is complicated and may need several pour points. Try to imagine where air will get stuck as the silicone fills up the mould and make sure you have some vents there. I ruined another one because air bubbles built up.

When it came to mixing up the resin loads of air bubbles get trapped in the mix. The professionals pour it in as and then use a vacuum chamber to suck out any air. I didnt have one so I figured I could mix the resin, put it into a large syringe, put your finger over the hole and pull back the plunger. This created a vacuum and you could see the bubbles getting pulled out of the resin. Then just inject into the mould. I wont say its the solution to the problem but it definately created a better casting. Just a pity for me, the mould wasnt good enough so the casting was also not good

I know its too late for these tips for your first mould but if you have to make another they might help. Maybe Joao (prorallye43) might have some more tips for us
_________________
Always interested in 1/18 Irish Decals/models

Great tips! Where were you 24 hrs ago lol!

Bugger. Bugger. Bugger. Cracked the original in half when trying to free it from the mould. However i do have a 2 part mould that should work. Fortunately i think the original will glue back together pretty cleanly (it has - just waiting for the glue to set and i'll give it a light rub down) and i'm fortunate that i didn't lose any definition in the original mould casting when casting the 2nd fill. You learn by your mistakes i guess......

(Edit) May NOT be an expensive mistake though..... 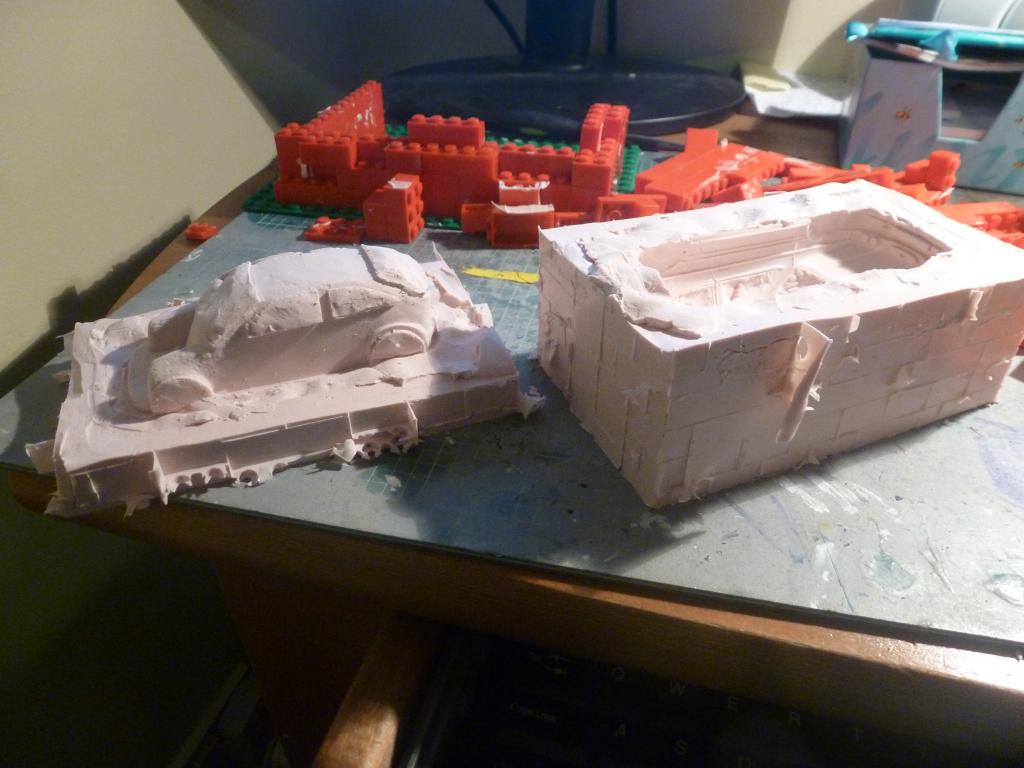 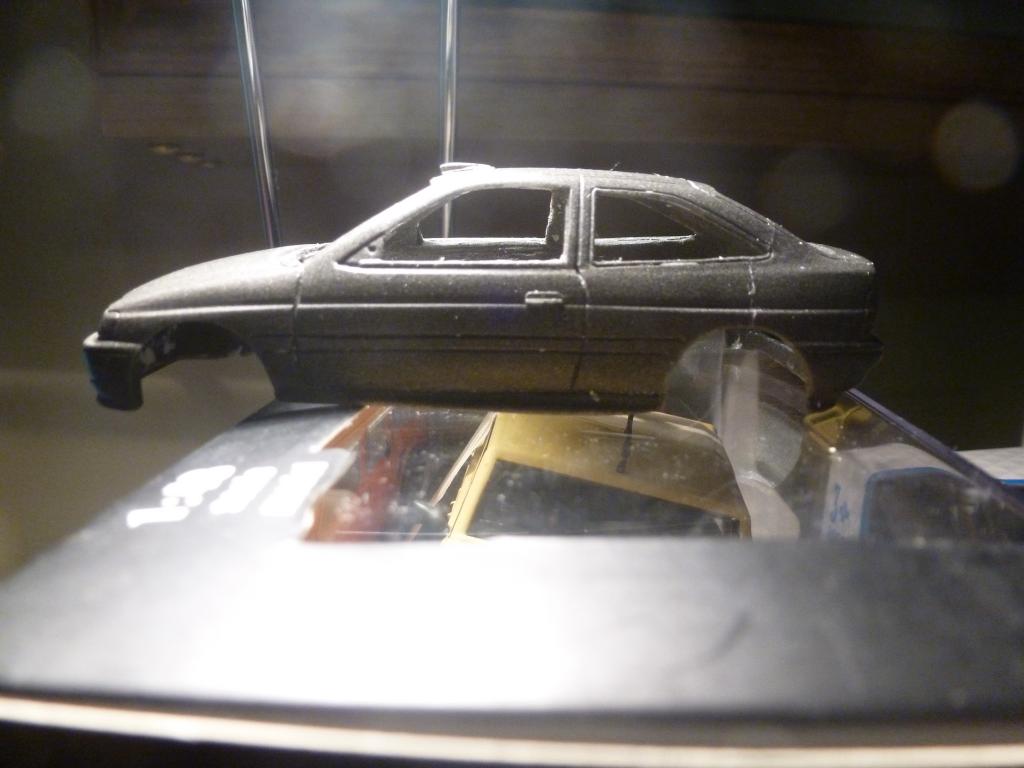