So I started work on this nearly 3 and a half years ago, its been a long build. I originally intended it to be 1/43 as the Otto M3 was not even announced at that stage. I quickly changed my plans when the Otto M3 was announced. Its taken so long to get to this point as at certain points, I either didnt have the skills or the contacts to do certain parts so I would hold off until they were in place. I would never have been able to draw up the artwork at the start, and over the years it has gone through many different stages and developments as my skills have come on.

I think the livery on this car is why its the holy grail for me in my collection. Its pushed my skills to where they are right now, geting that yellow curve is the hardest decal Ive ever had to draw, and certainly the hardest to apply. I knew the paint job was too difficult for me to do so I waited a long time for the right person to come along and thanks for Colin for the amazing paint job, it cant have been easy masking up that curve and his help colour matching was immense. It is far beyond what I thought capable on a model, I really cant compliment it enough. Then I had to find the right guy to print the decals. I cant get the same colour depth on the home printer, and of course cant print white. Huge thanks to Dave at Decal Dynamics (his new venture so give him a like on facebook if your on it)  for printing the decals. They really are great, easy to work with and the colours are so strong. Pat Nolan was a real help in the early days as he sent me some pictures he had of the car, and also helped me with a few logos that I couldnt figure out. Finally thanks to Billy for all the PMs over the time to chat about it and get me back into building it. I normally dont go through thanking everyone in public but Ive had so much help with this build that its only fair to let everyone know.

Right, down to the build. It started out as a Fina Otto M3. I removed the light pod as I prefer the car without it. Filled in the hole left behind with Milliput and sanded back to shape. Removed all the windows and sent off to Colin for painting. Wheels also needed to be changed to white from the original gold. Interior needed the dash converted to RHD (a dusty job) but worth it in the end. Also the original drivers seat is higher than the co-drivers so needed to remove the seat and cut away the raised platform so they both sit at the same level.

Decals were not much of a problem, except the yellow curve running along the sides bonnet and rear. This was a nightmare to draw and look right, as well as apply. It needed a white underlayer which also had to be applied before the yellow. I wont go into too much detail as I dont want to relive the hours and hours spent trying to draw them right.

So now thats its all finished, there are a few things that Im not 100% happy with, so may come back to those and change them. Firstly the yellow is not the correct shade. Its exactly as I sent to the printer but is too strong a yellow, although in the sunlight its not as bad as I thought last night. Secondly is the thickness of the curve. It could do with being a little thiner. Its a bit too thick compared to the real car. Im going to give it a few days to forget about the nightmare of applying them and see if I want to do it all over again. This is not the first of a run of models im doing so a few small inaccuracies can be overlooked as its only me looking at it. 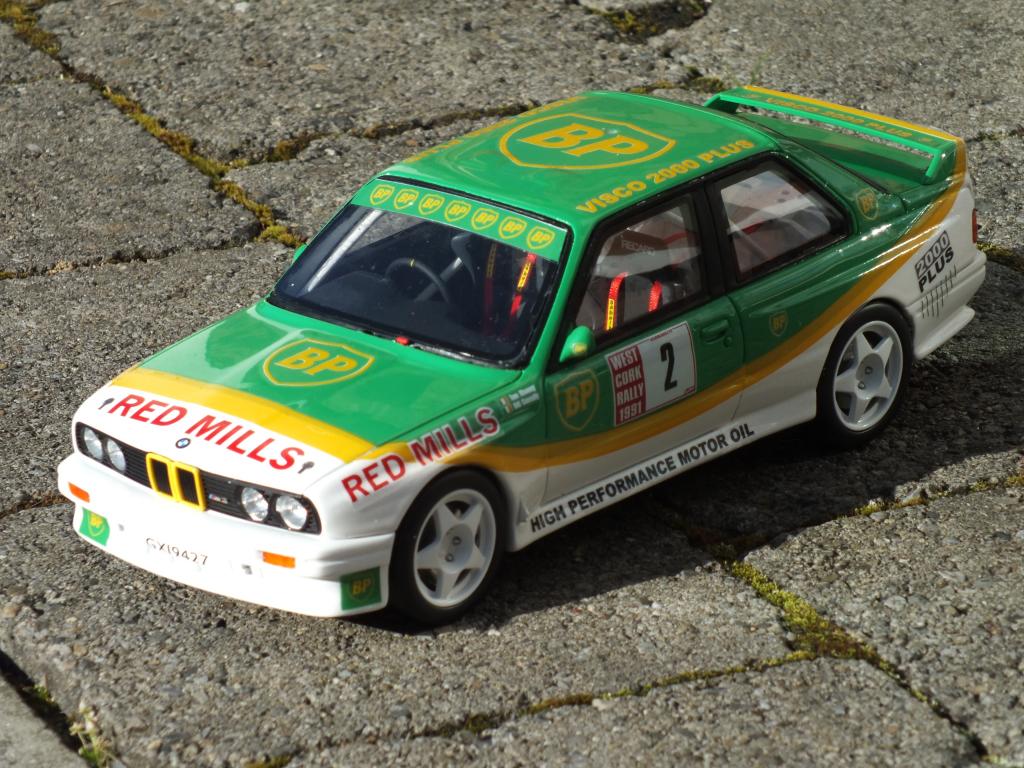 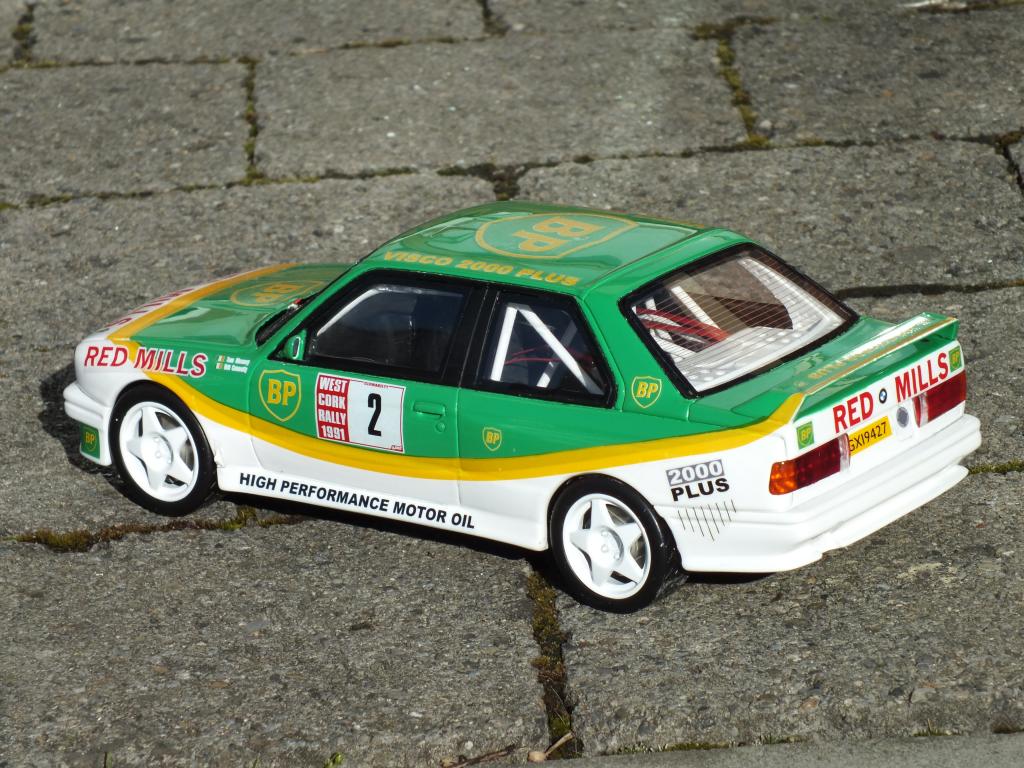 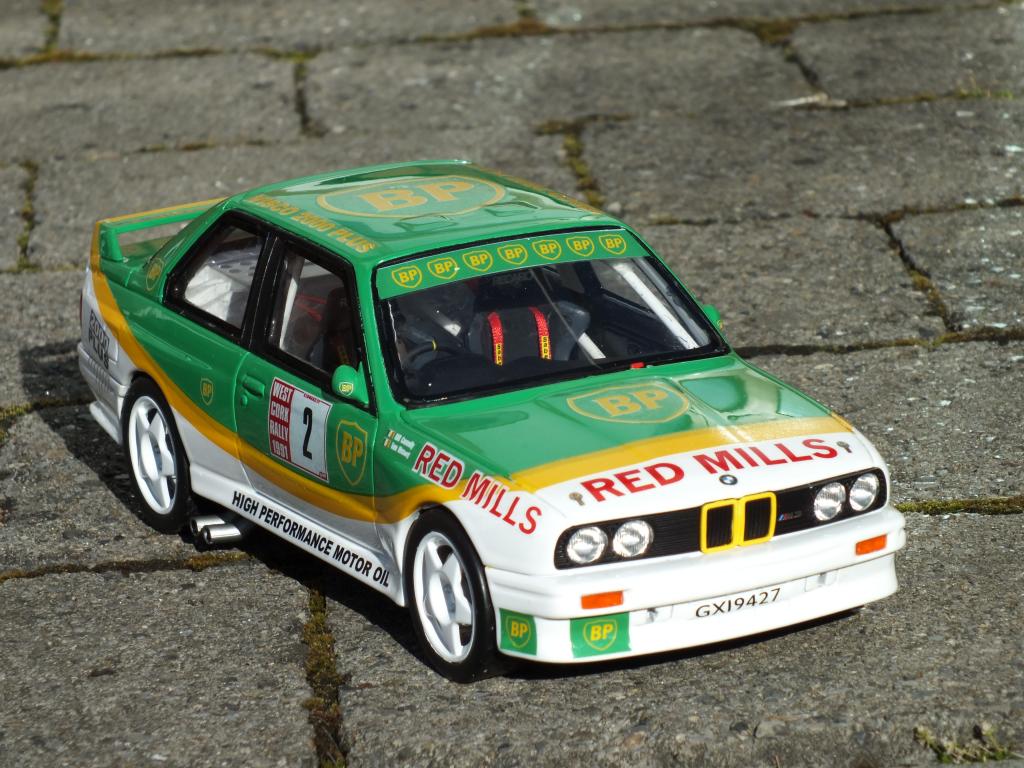 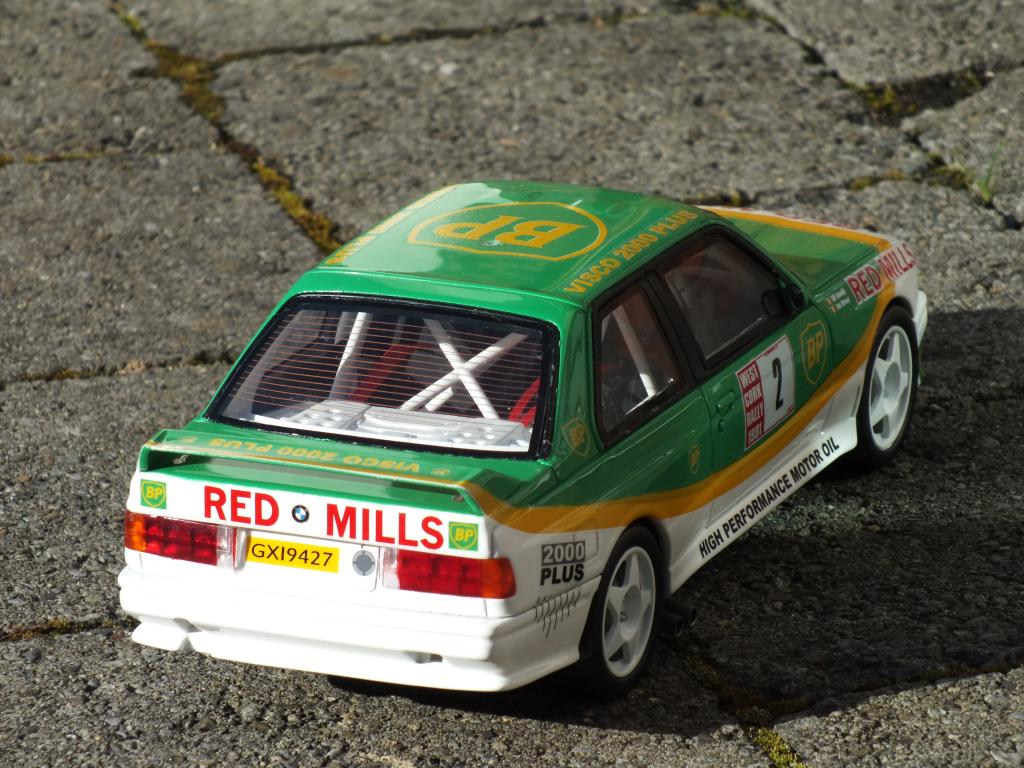 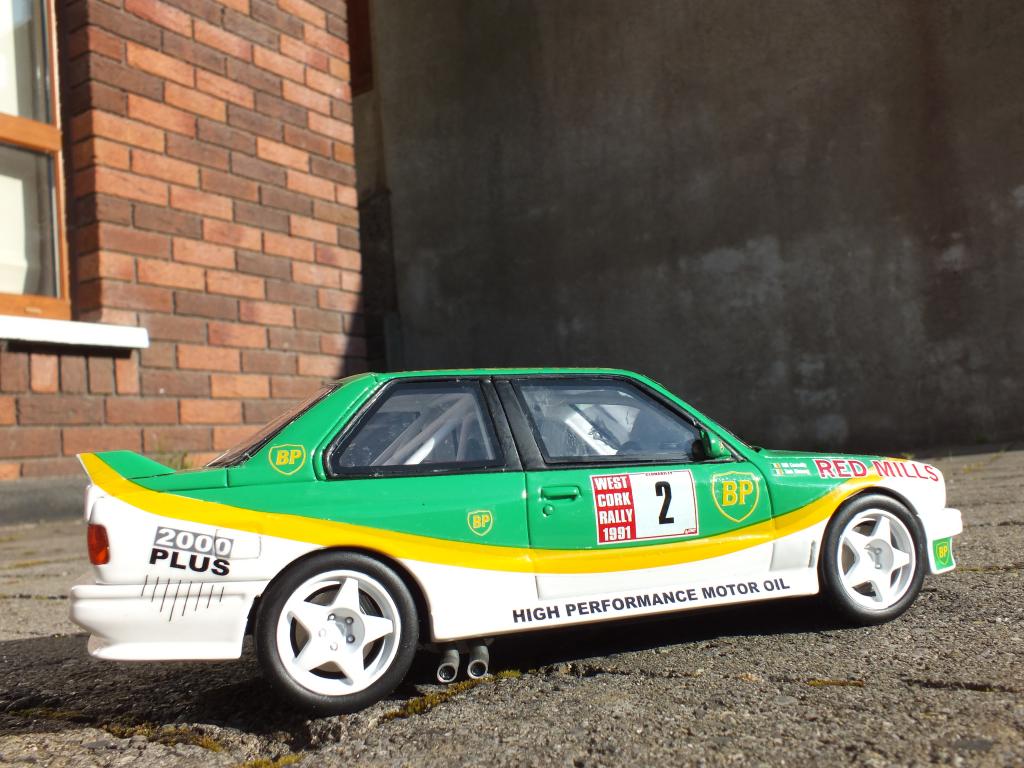 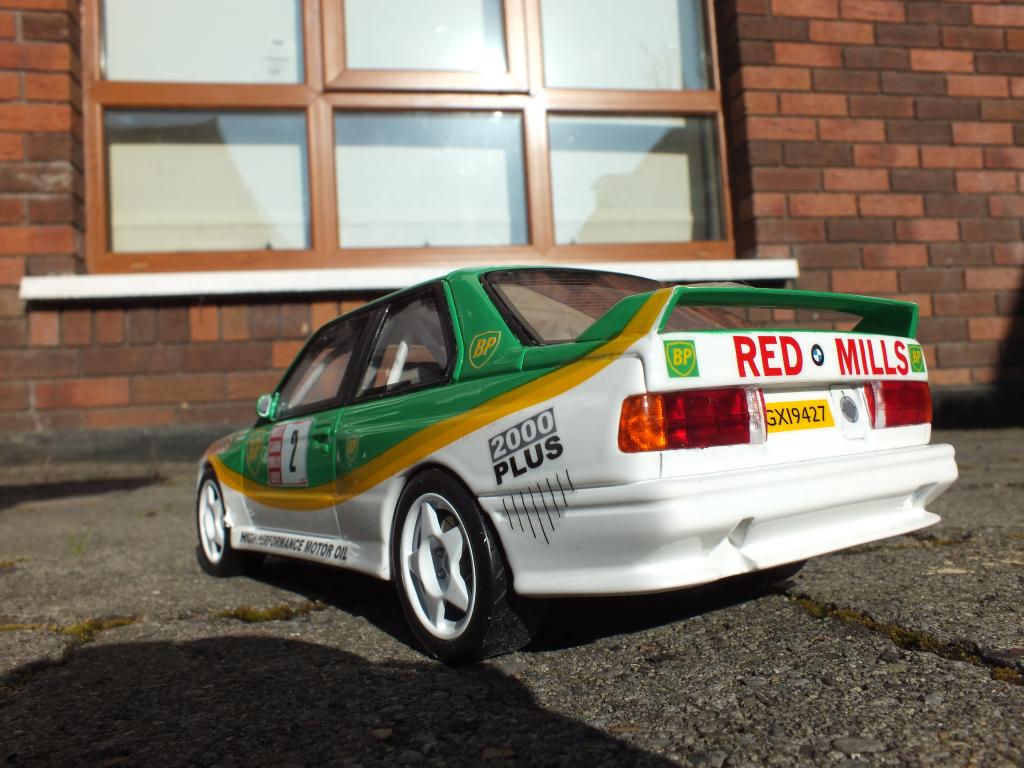 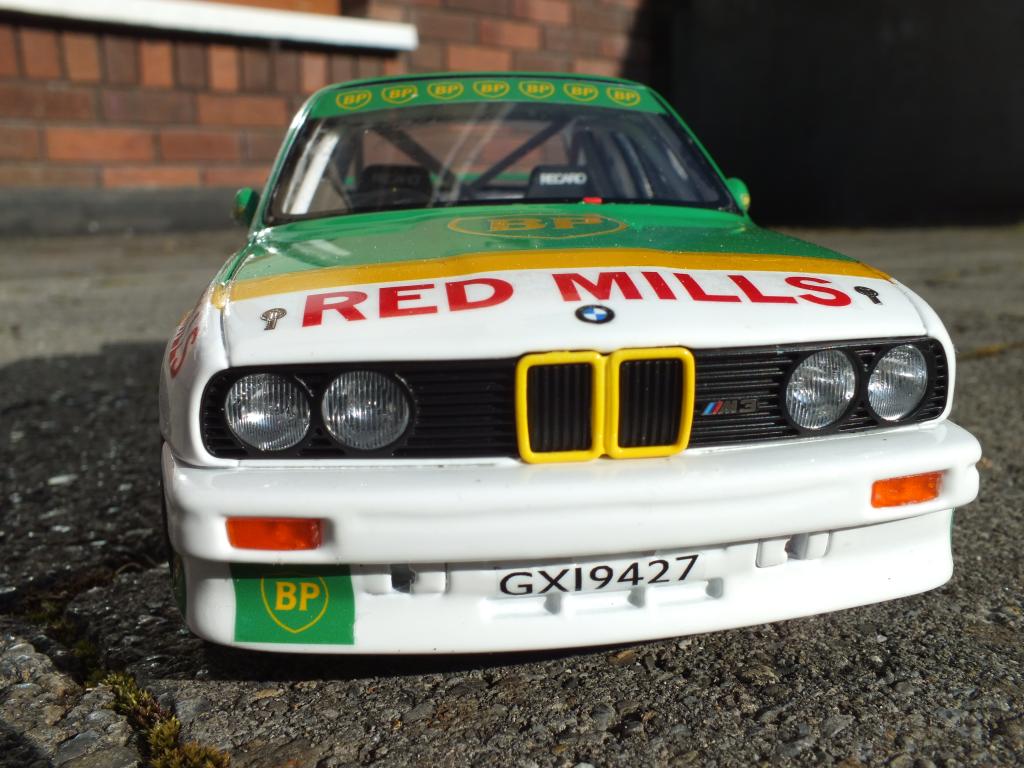 brian, you already know my thoughts on this class conversion m8, but wanted to congratulate you on the forum for not just producing another brill irish conversion, but for maintaining the commitment to designing and creating one of the most difficult decal-jobs to date....well done m8, coupled to cols paint-job, it was indeed worth the wait....

My own thought on this build is to "leave it as it is". Absolute stunning finish. You have done a great job Brian (plus the others

) and should be proud of the end result. I would be well happy if that was in my collection and so would alot of others. Well done m8.

fantastic result and looks spot on to me
You should be proud of it..

Possibly one of the best ever models done on this forum! Looks superb.

Awesome job and one to be proud off!!

Thanks for the comments guys. The more I look at it, the more Im inclined to leave it as is for the moment. Its sitting beside a work in progress Cronin M3 at the moment and it looks good so it will stay that way for a while.

Excellent Brian be proud off it.
It would look good in any collection.

Quite simply stunning Brian! The detail is unreal, well done to you and all the lads for the help, because it is quite possibly the best model i have ever seen.
Take a bow man!

Thanks lads. Always good to have another model on the list ticked off. Just need to sort out a display box for it now as I dont want it to go back into the polystyrene box from Otto
_________________
Always interested in 1/18 Irish Decals/models

You can be proud of this one, looks absolutely stunning.

That is superb - top notch in every way

Finally have it in a proper display box and can relax a little in case anything chipped or came off when in the Otto box. Bought one of these boxs to see what they are like and will be buying a lot more of them as they look great. Base of the model has to be modified to attach to the case but it cant be seen from the outside so theres no problem. Case makes it look like a 1/43 but its a little bigger 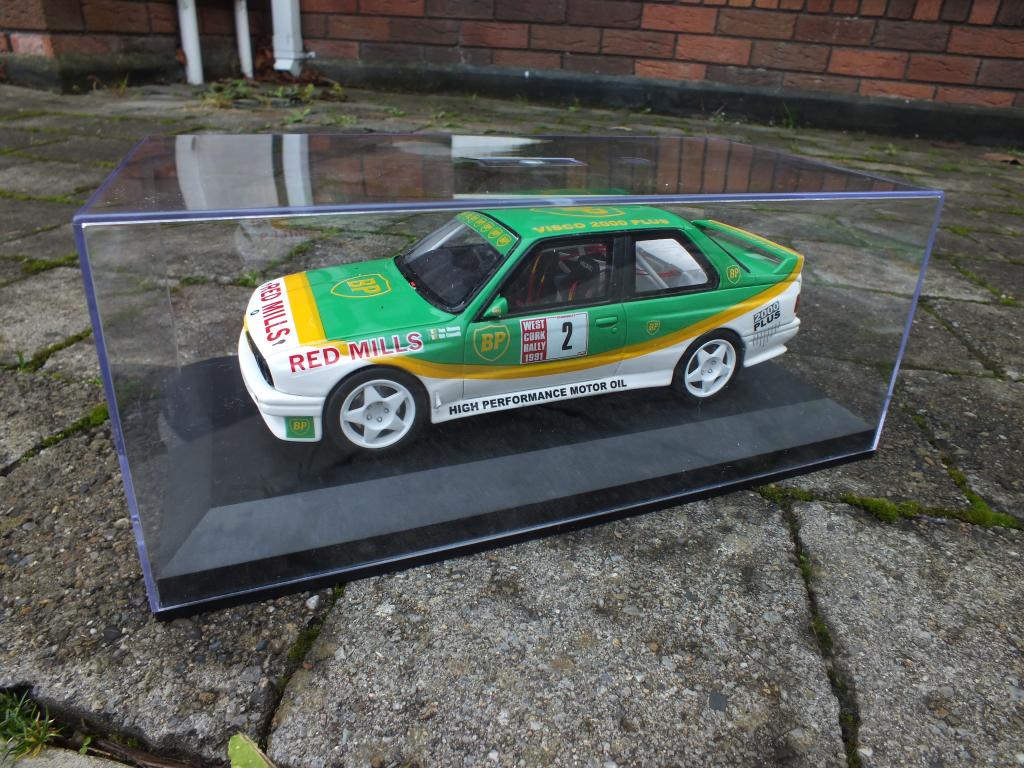 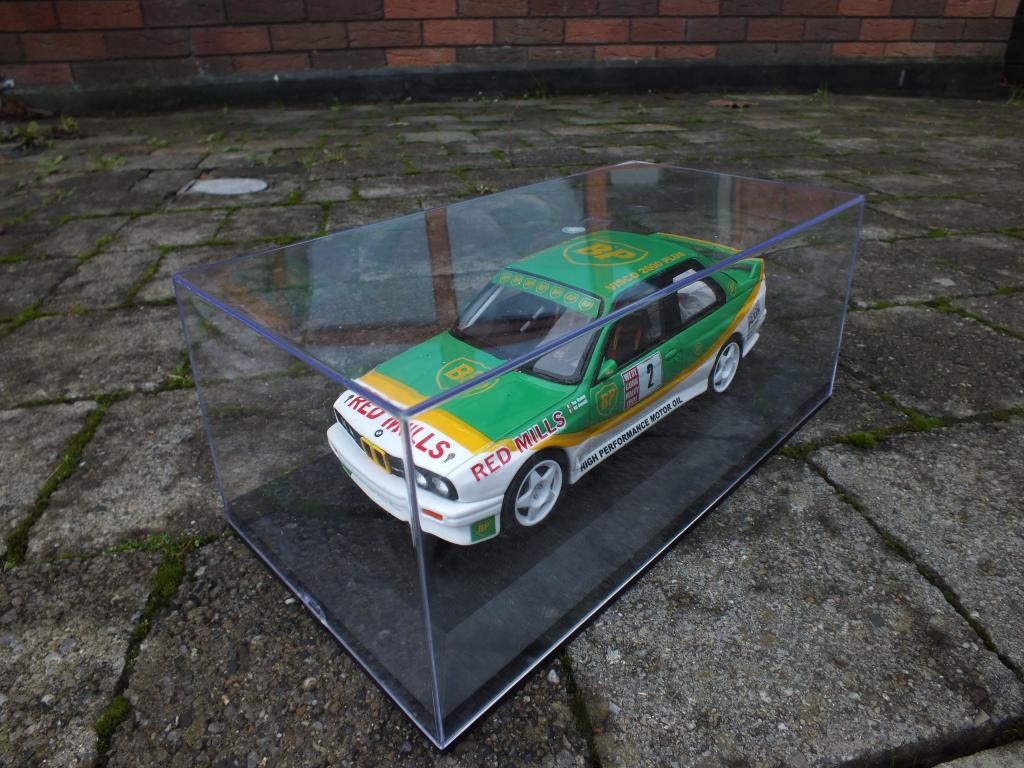 bought a couple of those cases myself brian, excellent quality and value for money, plus the sloped edge allows a plinth decal which can be read from face-level....looks class m8!!

Very happy with the quality of them Billy. Much better than I had hoped for given the price. Will be buying a good few more of these for my other M3 projects.

I have my eye on a piece of equipment in work though. Its like these cases only its 4 foot long and used to keep valuable items on display safe. Im hoping when they are getting rid of it Ill be around take it home

Every time I open this thread, I'm overcome with lust and jealously. Looking awesome.