Plans in place to return to this. Driver line-up looks a little disappointing but I think they have 16 Lancia 037's linedup for the event - it was 16 Stratos the last time I was there. We will have a little time on our hands on the long run from Bergamo to San Marino - any recommendations as to whether one should visit Ferrari, the Mille Miglia Museum, etc on the way ?

The Mille Miglia Museum is excellent. Set in an old monastery it is an object lesson on how to put together a museum. A few older cars not many later cars (most in private hands). The upstairs section is very good, but down stairs needed a bit more work (that was when I was there in 2009). I would put this museum very close to the top of my best motor museums

Ferrari Museum- I thought it was not as good as it should have been. But again key cars are in private collections. Having said that it was a few years ago so things might have changed. BUT it is Maranello, the factory gates, the test track and lots of model shops - strangely selling everything Ferrari!!

Have a great trip

Official event site. Its the 30th anniversary of the Delta S4 so 16 are entered and really really wanted to go but sadly not to be

James I guess there wont be as many signatures for "the book" this time but what a knock out event to be going to. From friends that used to go the San Marino back in the day I know there is a really special model shop there so will try and get some detail from them.

Located on the east of the city on the right as you travel towards the city.

The museum is located in a converted monastery. Apparently a lot of signs, posters, assorted other MM stuff was found in a lock up. Before it all disappeared onto ‘ebay’ the council stepped in to save it for a proposed museum. They found this location and the museum was set up. Brilliant presentation and easy to follow with a pod containing letters, memorabilia and other artefacts from each year. Each race has its own map and results. Alongside are details of events happening elsewhere in the world at that time, and along the ceiling a strap line covering each year’s event.

Look out for the massive Bugatti radiator grille with a TV in the middle playing old films. As I walked past I recognised the commentary – Raymond Baxter on the 56 MM with the Sunbeam Rapiers. Do you know why the Rapiers were painted red for the Mille Miglia? Team manager Norman Garrad had previously spotted that the Italians would furiously wave through any red car (the Ferraris, Maseratis, Alfas, OSCAs etc..) across railway crossings and road junctions so hopefully they would wave a red Sunbeam through….that the numbers on Mille Miglia cars represents their start times hence 722 on the Moss/Jenks Mercedes was a start time of 7.22am

Clearly genuine Mille Miglia cars are worth a fortune, so the real cars on display are mainly from the pre-war period.

The photos are from a trip we did back in 2007!! Cripes was it that long ago. As I said before a very good museum and well worth the effort. 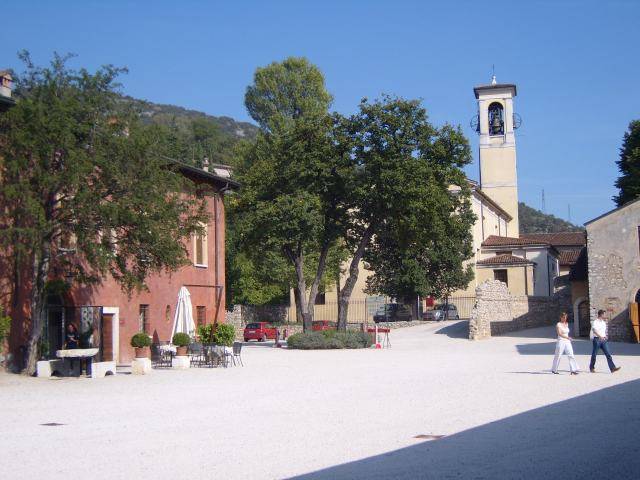 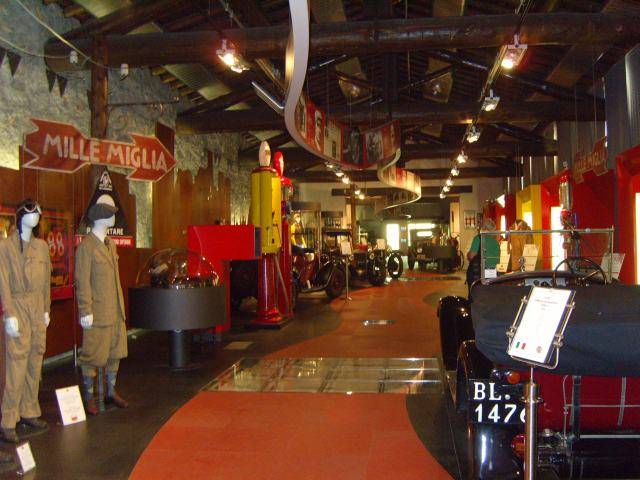 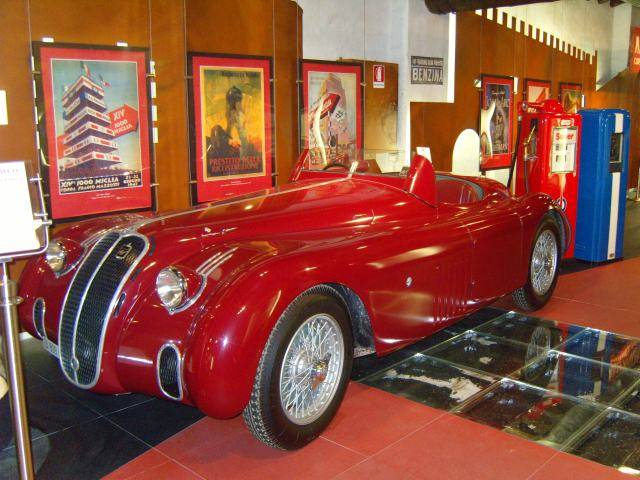 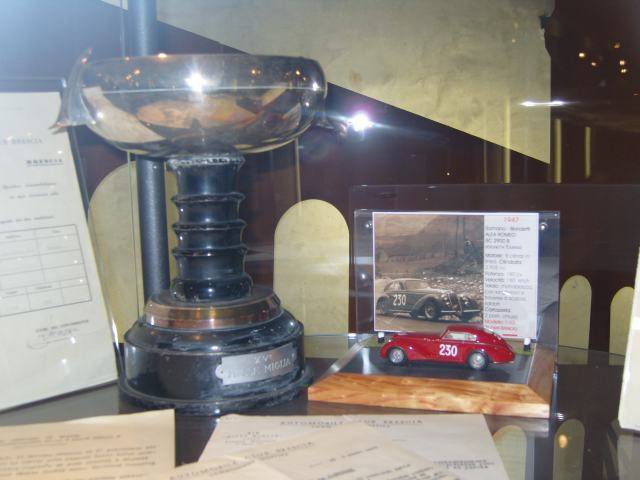 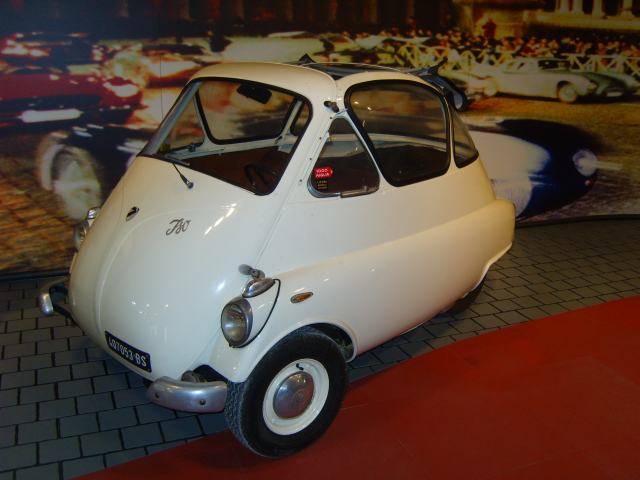 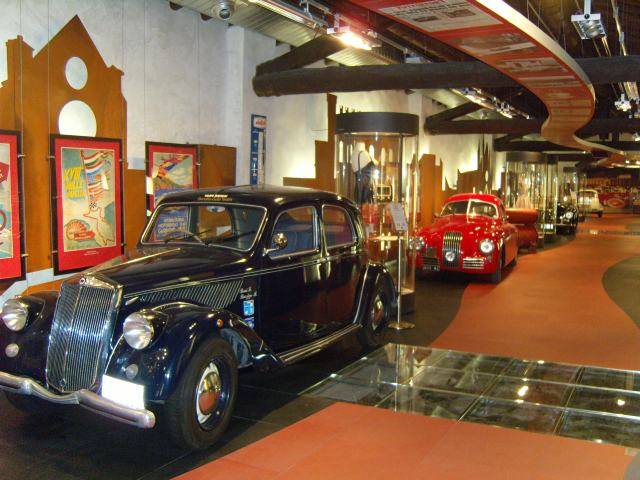 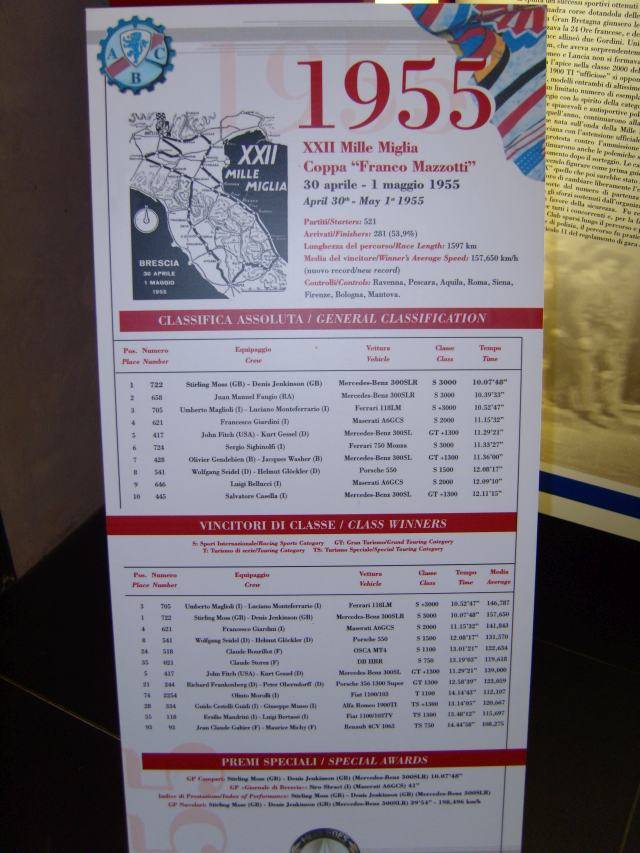 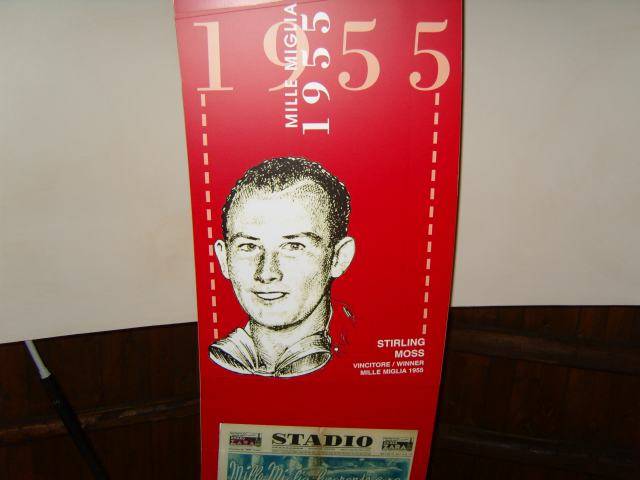 Certainly a lot of monies worth there!

Those Lancia are absolutely gorgeous!

Looks like James may have got a little wet yesterday judging from a couple of these vids but would have loved to have been out on those stages at the weekend!

Before setting out I knew the driver line-up was not a star studded as last time. however one can't argue with any rally that has Alen,Biasion,Kankkunen,Duez,Duval,Delecour,Schwarz,Paddon and latvala.

Lancias on this event were a bit like Mk2 escorts on an Irish rally - Integrales and 037's all over the place. Friday night was excellent but saturday had non stop rain from before we got up to after we went to bed. Cars that impressed were the usual suspects - Diana in the "131" running as a course car, Klausener in the Quattro and a car that blew me away an Audi S2 Quattro Coupe. Far too many modern cars there for my liking - Focus WRC and Peugeot 206WRC. I would have big concerns for the safety aspect of how that rally is run and probably the less I say the better.

The sports arena in Seraville where the rally is based has been commercialised since my last visit 4 yeas ago with a big selection of people selling models, books, teeshirts, and specialist manufacturers selling various other wares. The models spanned the full gambit from some bases I bought for 5 and 10 euro up to code 3 models at over 200 euro. I bought a factory built Arena stratos for 70 euro.

Big crowds. Famous navigators also there Kivimaki.Repo,Geisdorfer,Moya . An event I would love to do sometime. Well worth a visit but for me I will only be going back if I am competing.

I hope to upload photos onto facebook at some stage.

Called to the Mille Miglia Museum in Brescia on the way back - again gorgeous cars.

Looking at the video clips posted earlier I did think that the spectators were a little to close for modern days.

Yes we stood like that back in the 80s and I am glad I did, but for very good reasons we have realised it was perhaps not such a good idea.

Good to read you had a good time though. Must have got a good few autographs?

CDM wrote:Looking at the video clips posted earlier I did think that the spectators were a little to close for modern days.

Yes we stood like that back in the 80s and I am glad I did, but for very good reasons we have realised it was perhaps not such a good idea.

Good to read you had a good time though. Must have got a good few autographs?

Just passed the 250 mark for autographs so its now a case of very low single figures at any one event - rally Legends was particularly good Moya,Kivimaki and Delecour. All the other I had met before.
On Friday night in particular they had an issue with drunk spectators and had to run course cars between some competitors but what I found astonishing was the course car and unmarked Jeep that drove the stage backwards at full speed with no sirens through the crowd who were walking on the road out of the stage . We has assumed the stage was cancelled but it wasn't.

Nice set of images here although Duval looks like he's stacking the weight on!

Its not my place to make any announcements but some info is available elsewhere . Looks like 5 Irish cars doing the event this year. John Leahy has posted that Russell Brookes and Owen Murphy will share the driving in the Lotus Sunbeam. I hope to have my backside planted in one of the other cars. Should be a bit of craic.

I'll be there, spectacting. There should be no risk of me hijacking your seat this time.

I have just booked the flights to this event and to be honest it has cost me more to travel to some rallies in this country. Cork Stanstead cost €13.25 one way and Stanstead Bologna £15.29 sterling one way. I have a different return route but I am amazed that these prices are sill available. Gronholm, Kankkunen, Panizzi, Brookes, Navarra, Paddon, Alister McRae all supposed to attend. And of course Juha will be there

Some of the cars and drivers before scrutineering etc. Not jealous at all

Sad news from this event this evening. RIP

Just looking at my post on here from last year and one comment unfortunately stands out for obvious reasons. Sad end to a superb event. Thrilled to see it from the other side of the windscreen. The Italians could not be more helpful and as a competitor I have never been better fed on an event. The organisers laid on food on Thurs night, Fiday night, Saturday midday and evening and again on Sunday at midday - competitors only but top class fare . Friday night was very special - flares air horns and fireworks on the stages and the regroup was in the heart of the old town right on top of San Marino . The marshals were armed with cardboard sheets to put under the cars to prevent oil from dropping onto the ancient paving As I said we were also fed and watered and the weather was beautiful. Sat and sun were wet just like last year . We could not get the tyres to work so we were under steering and spinning but that was half of the fun - four cold tyres on slippy wet tar !!!

Be glad you left on Sunday, the heavens really opened on Monday.

We made our first trip to San Marino and it's something that should be experienced. Crowd control can be very inconsistent, they can be very strict in some places, yet they'll allow you to stand on the outside of a hairpin? Tape also seems to fulfil a very decorative function. We've seen the result.

Back to the rally itself - great, as long as you're not allergic to Lancias.

The only thing that didn't go as planned was a selfie with Kankkunen. I'll have to go back! 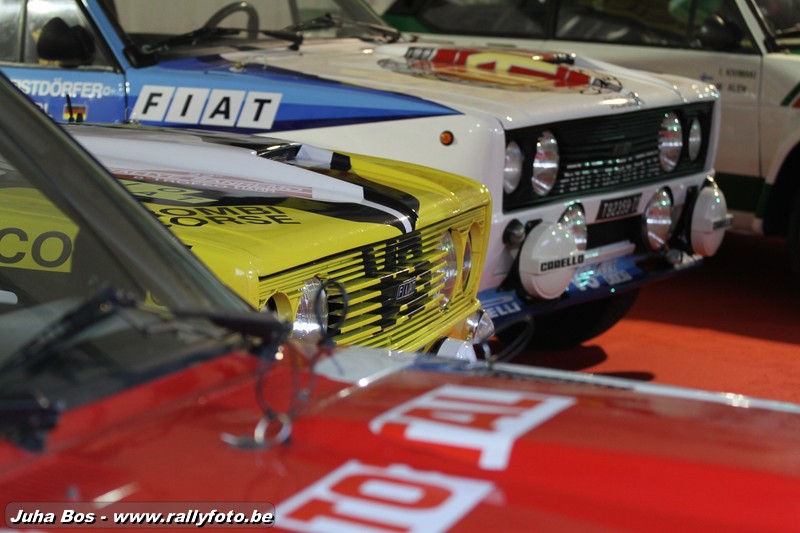 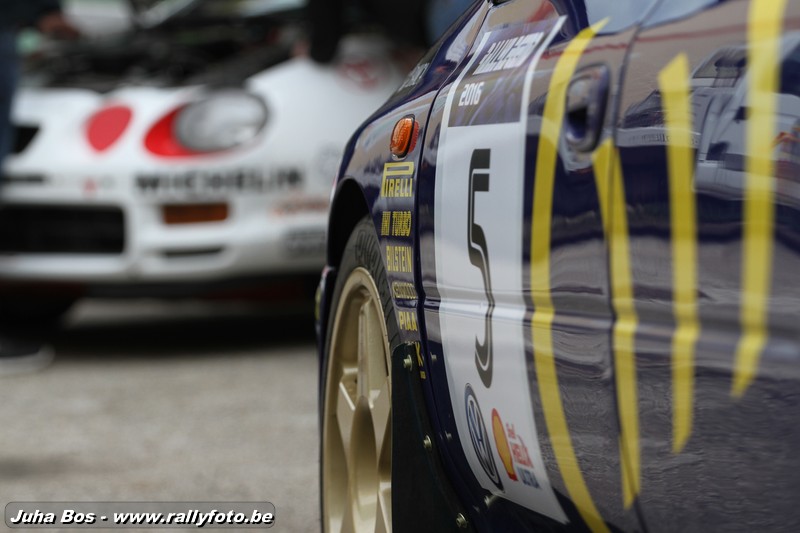 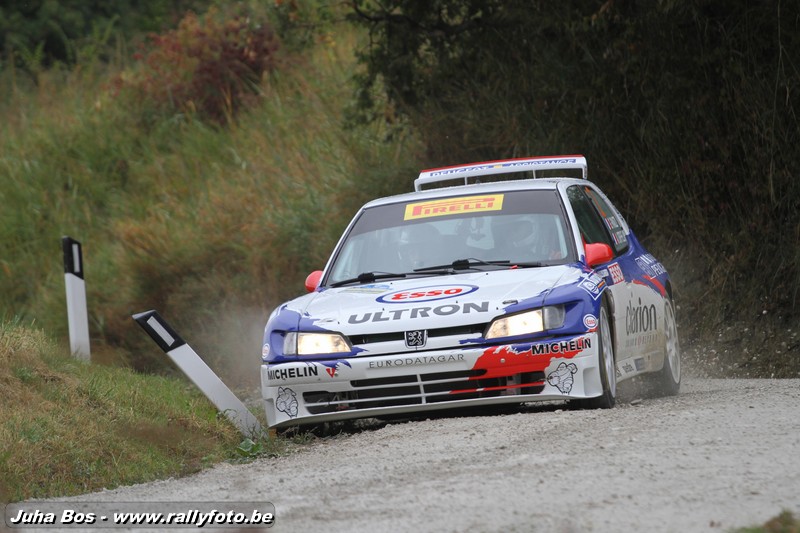 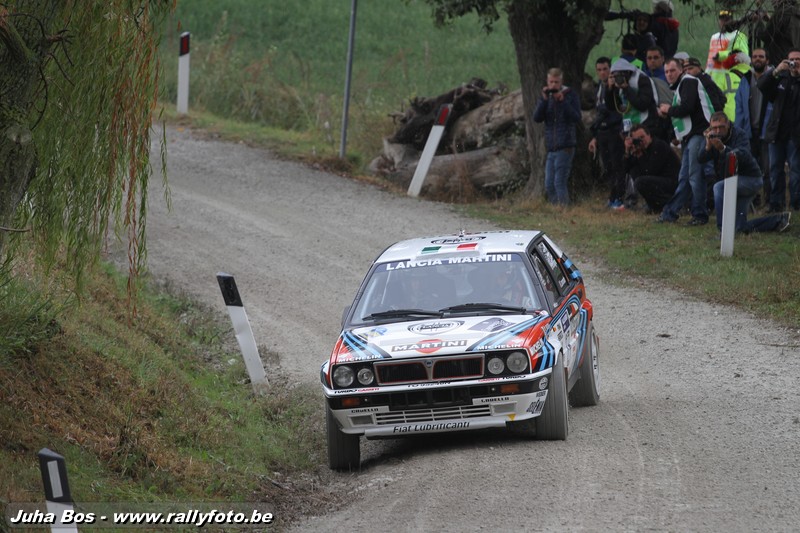 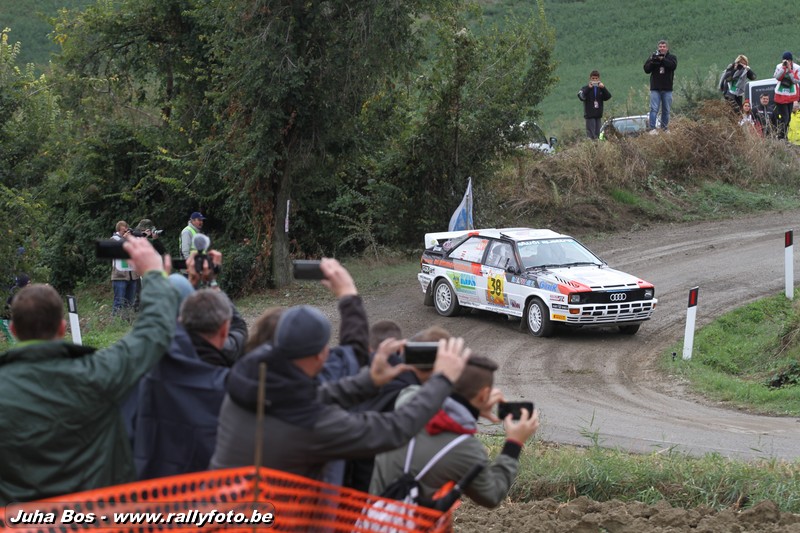 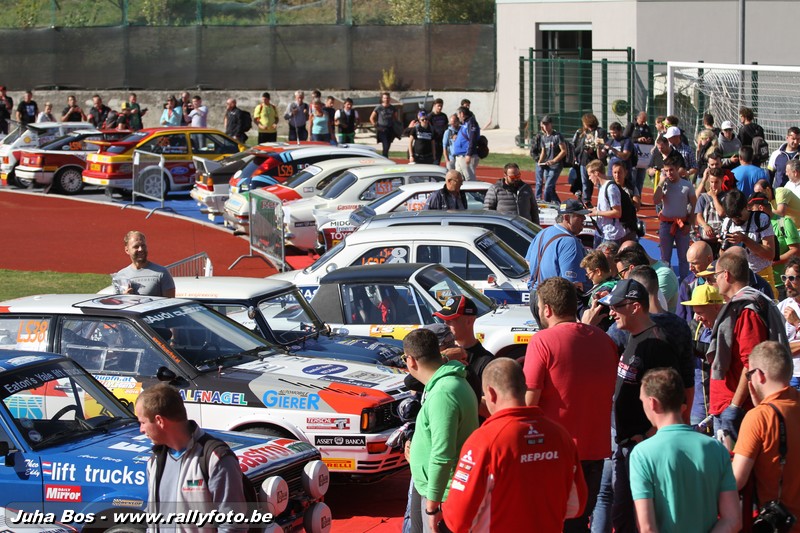 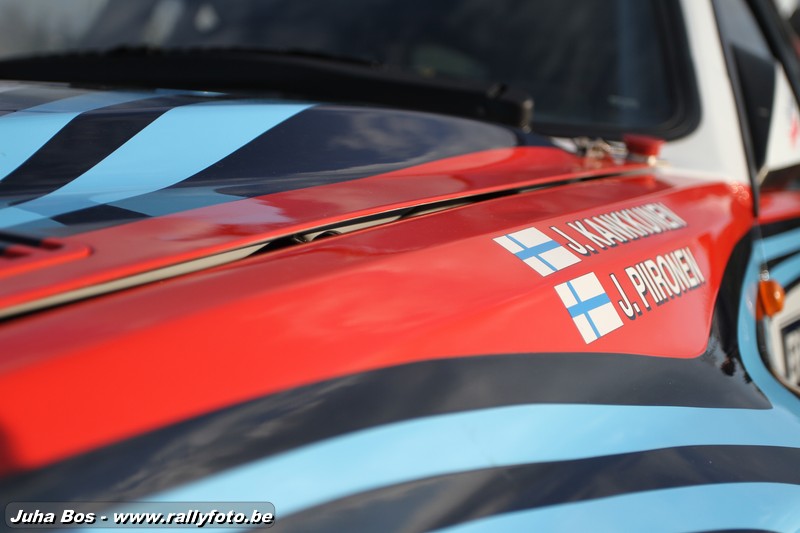 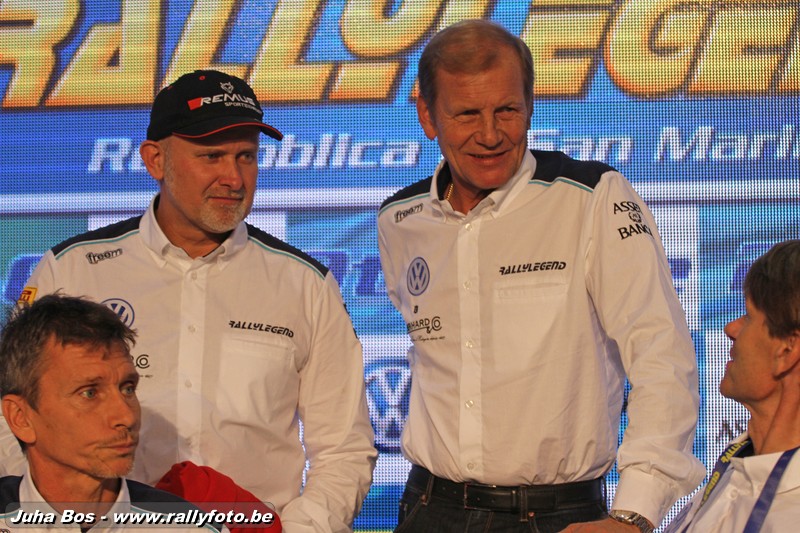 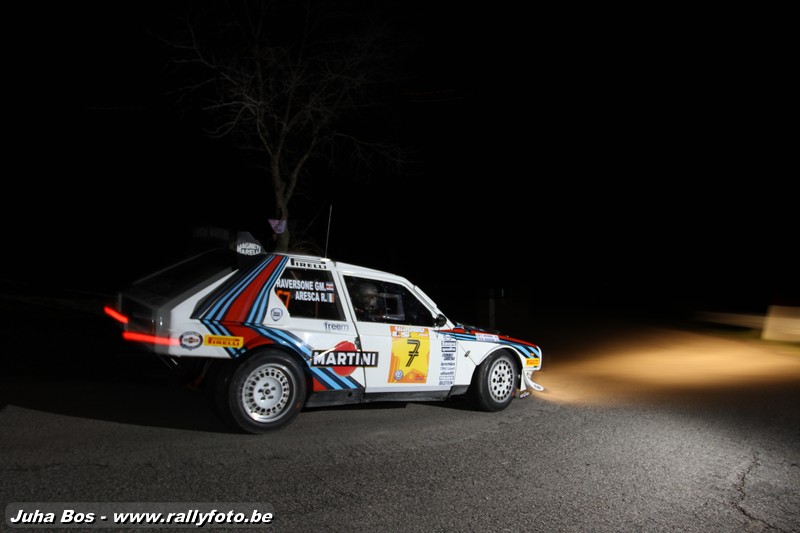 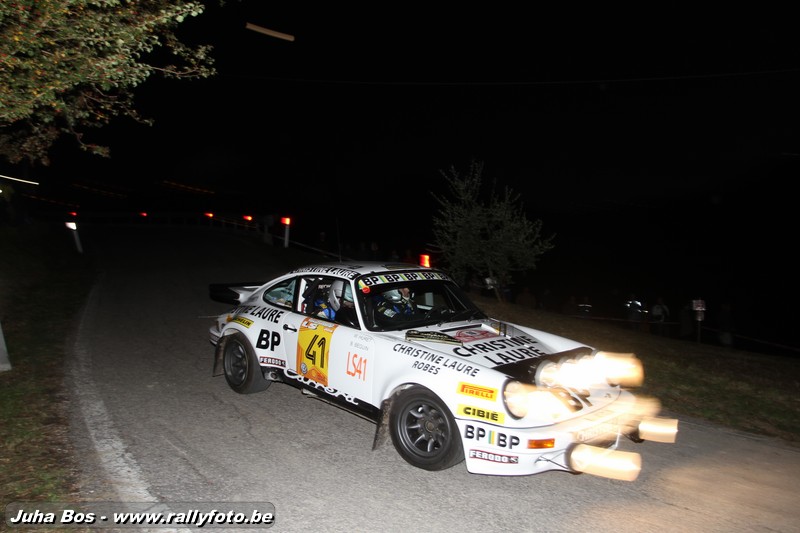 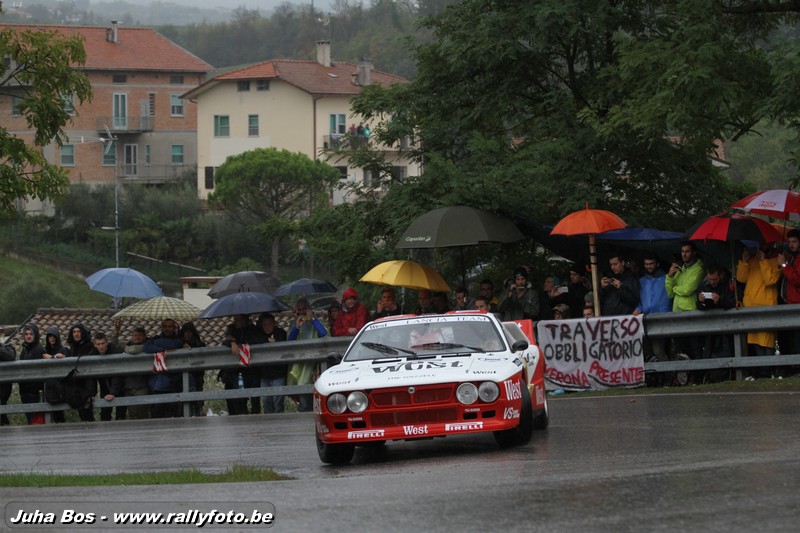 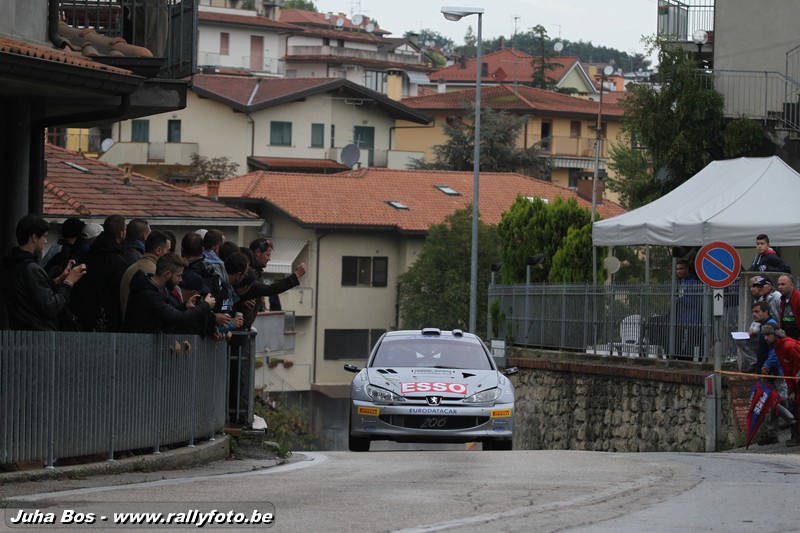 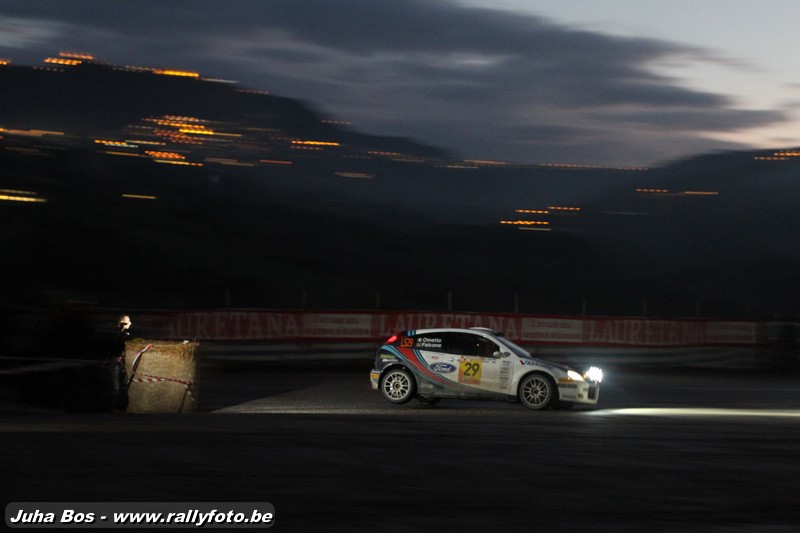 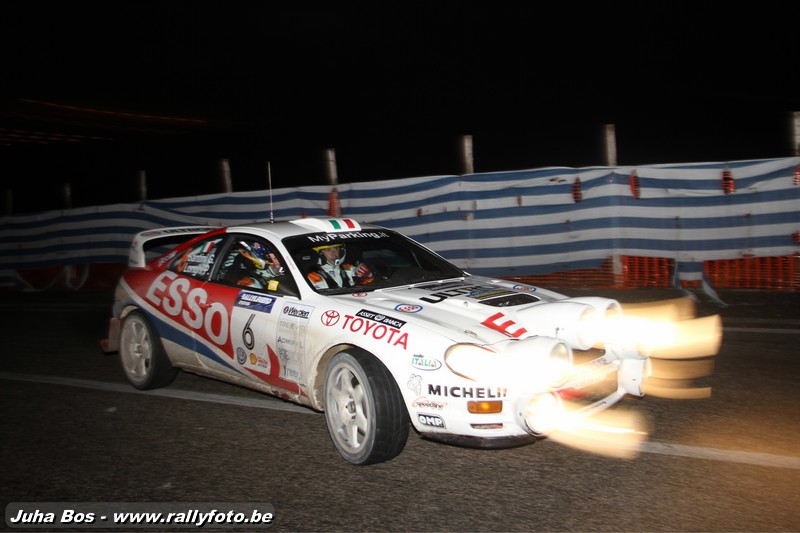 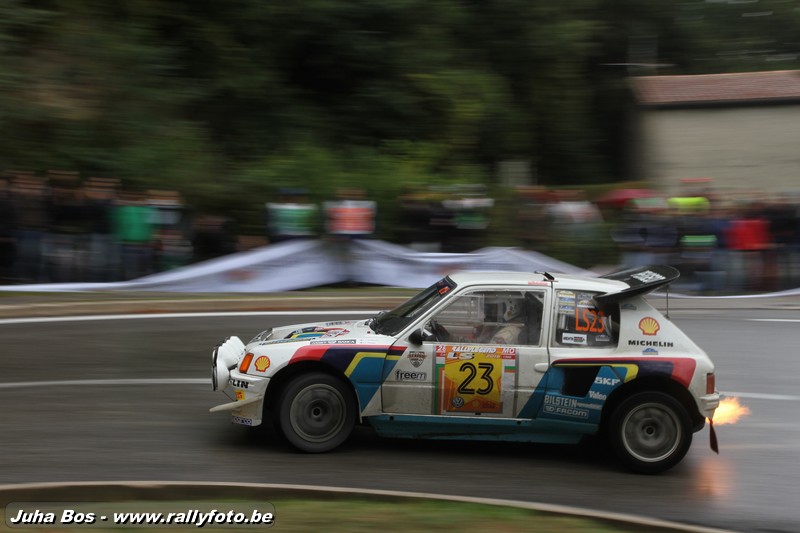 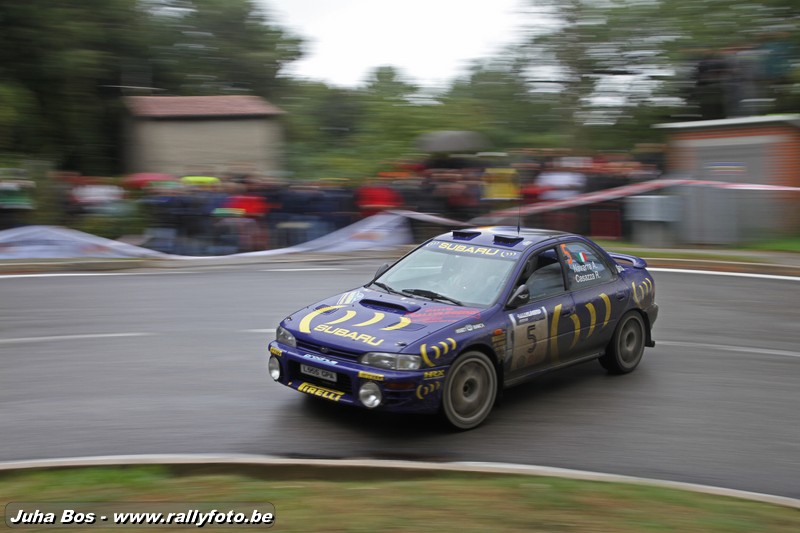