I just thought I would take a few moments to share some news about this historically significant car, and the latest situation - taken from a post I wrote on my Austin Rover Motorsport Facebook group...
__________

Approaching 36 years ago, 'Project Metro' was born from within what was then B L Motorsport at Abingdon, which I gather was the very last competition vehicle to come out of those 'hallowed' sheds - the former home of the legendary BMC Comps Dept.

Originally a spaceframe Metro silhouette rallycross car powered by a 'fairly trick' 200bhp 16 valve twin OHC engine, the car was debuted at the 1980 Motor Show for the launch of the Metro itself, and later rallycrossed by Trevor Reeves in Unipart livery, and then in Northern Ireland by Jackie Harris, amongst others.

After a lengthy sabatical, this infamous (and pretty!) little car has been fully restored by Davy Aiken. Having acquired both the Reeves / Harris car, plus the other spare car, both of them were then built into the restored car, complete with an 11,000rpm revving 1400cc BDA series engine - forced on the team due to the rarity and unavailability of the original unit! Sadly, this replacement engine has also forced the team to ditch the original 'standard profile' bonnet in exchange for a Metro 6R4 bonnet to cover it, as can be seen by the photos.

Resplendant in period Unipart livery, the car made it's debut appearance over the weekend at the 2016 AXA National Classic Car Show at the Royal Dublin Society. Photos by Scott Singleton, Peter Boyd (Speedy), and several internet souced images - with grateful thanks.
_________

And here is Steve's one-off model based on a NEO MG Metro 1300 base model of 'Project Metro' all those years ago - as seen on his stand at 2016 Race Retro. You need to make a 2016-spec version now with an imaginary BDA engine underneath a Metro 6R4 bonnet!... 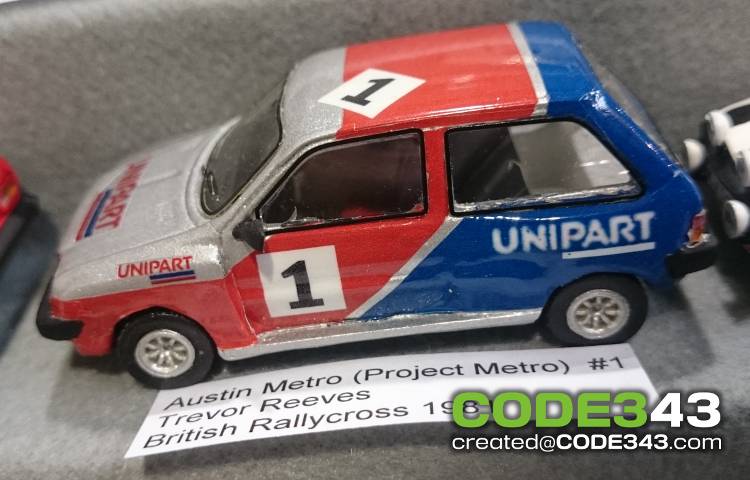 Now all I/we need is some more models doing

Couple more of the front view No problem at all, Chris.

Thank you, Peter. Not sure I like it with the non-standard bonnet, but 'means must' I suppose.

Cowley wrote:No problem at all, Chris.

Thank you, Peter. Not sure I like it with the non-standard bonnet, but 'means must' I suppose.

Oh there may be chance of reuniting Trevor with the Metro (I hope it happens) in June at a Mini Legends event in Northern Ireland.

Cowley wrote:Not sure I like it with the non-standard bonnet, but 'means must' I suppose.

36 years ago.. Its seeing cars like this re-born that makes you realise how old you are!!

I know exactly what you mean!