Saw a comment on Facebook earlier saying Bryan Brophy has passed away. Bryan was as a stalwart of Galway Motor Club for a number of years and has officiated at many events at home and abroad. To people on here he was better known as brogal and was an avid collector of model cars and in particular anything from Irish events or with an Irish connection.

RIP Bryan, your wit and sharp comments will be missed

very sad.....deepest condolences to bryans family from myself and im sure from the forum as a whole... 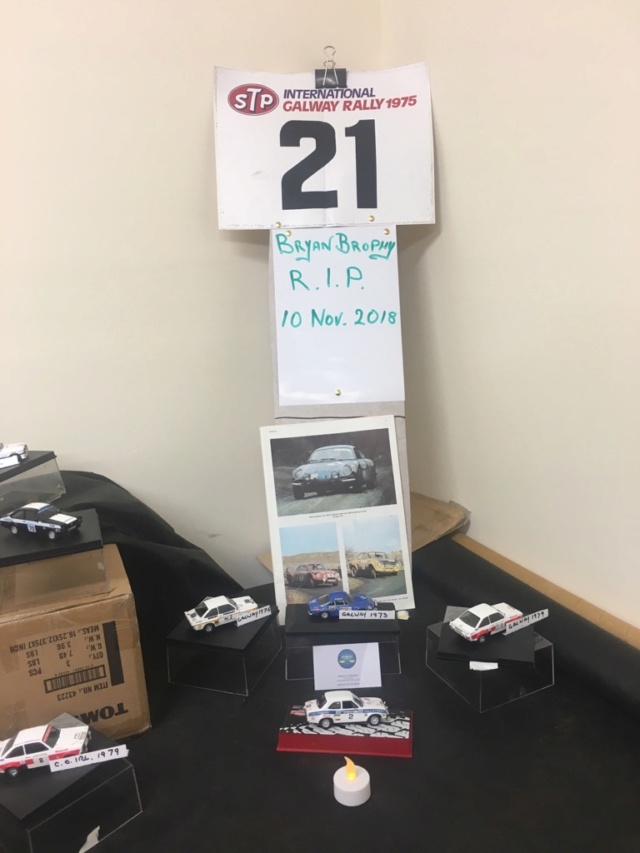 Just a photo of a Tribute at the model show today in Killarney to the late Bryan Brophy of DRM & Galway Motor Club who passed away yesterday.
In the photo is a Door plate and a copy of wheels magazine depicting the Billy Coleman Alpine during the Galway Rally. All info supplied to me by Bryan to help with the making of the Galway Rally Alpine of Billy Coleman seen here in the foreground.
_________________
Always interested in 1/18 Irish Decals/models

Terrible news for his family and friends. Always an active contributor to the forum and will be greatly missed.
_________________
Always interested in 1/18 Irish Decals/models

RIP. I was only thinking about him a few weeks ago as he had asked me to make several Galway rally models for him.

RIP Bryan, thoughts with the family at this difficult time

May he rest in peace. My thoughts are with his family and friends at this very sad time.

Bryan has left the (rally) stage...

I have never met Bryan but we shared our love of Rallying on this forum.

My thoughts are with his family & friends.

Deepest condolences to his family and close friends.

Here is a lovely and very fitting tribute by the great Alan 'Plum' Tyndall that I just saw on Facebook.....

It is with a large lump in my throat and a tear in my eye that I have to reflect on Bryan Brophy’s passing. The last years have been far from easy for Bryan, his truly remarkable wife Brigid, and the Brophy family so when Bryan slipped away at 3.45 on Saturday morning, as we too often have to say, it was a merciful relief.

Silenced for ever on that November morning was one of the loudest and most influential voices in Irish motorsport as Bryan could not just be heard at a great distance he travelled great distances to be heard and to serve the sport that he loved so well at the very highest level.

He was our ‘Rumpole of the Paddock’ and his contribution to Irish motorsport has been immense. As a Steward and Observer he was well know in this country and abroad. Bryan was Hon. Treasurer of his beloved Galway Motor Club for 21 years, but distance was never an obstacle as he crossed Ireland on numerous occasions to serve on the Motorsport Commission for many years and became the Chairman of MI’s Rallies Committee.

But it his international achievements that have been most impressive as ‘The Broph’ became the first Irishman to act as an F1 Steward in 1993 when he accepted that post at the Monaco Grand Prix.

When The FIA introduced the practice of appointing four permanent stewards in 1996 Byran was chosen along with Nazir Hoosein from India, Paul Gutjahir from Switzerland and Leopoldo Barbosa from Venezuela. He was Ireland’s Titchler Delegate on the FIA from 2004 and served on the FIA’s Historic Motorsports Commission, presiding over their Circuit Sub-Committee.

But Bryan wasn’t just a desk man as he liked to practice what he preached however ‘Rumpole’s’ attempts at racing and rallying were often short lived, as mechanical preparation never seemed to be a priority.

I first got to know Bryan and Brigid in more care free times when they were the central core of the team that pioneered the Galway International Rally. And what a great bunch they were – Eamonn Cotter, Marcus Sweeney, Bob Bradly, Pat Higgins, Ray Murphy, David Baines, and their extraordinary press officer Brian G Thornton, who like myself never let the facts get in the way of a good story.

February in the west was always one of the highlights of the year and many of that bunch became lifelong friends. Sadly now only Marcus, Pat, and Ray remain, but their friendship and generosity will always linger.

And when it came to hospitality the Brophy’s were on a different planet. The craic went into orbit when we sampled Brigid’s cooking and Bryan’s cellar in Taylor’s Hill and Barna and it wasn’t just the Tyndall family who benefited from their open house policy.

As things got tight at the end of RPM’s days on television the Brophy’s threw opened their door and housed our whole team during the 2012 and 2013 rally weekends. We were never short of volunteers for those events.

‘Rumpole’s’ bluster will be sorely missed and the world is now undoubtable a quieter place but it is also a duller place as one of the great characters in and benefactors to our sport has gone OTL.

Rip Bryan. Had many dealing with him and always the gentleman.

Thoughts go out to his family and friends.

I think I'm right in that I remember him doing the historic section of the Galway International in or around 2011.