Anyone come across a photo of the top of the bootlid of this  car.  The original car had bastos on the top of the spoiler but I assume that this was taken off as elsewhere on the car. The rear facing section of the bootlid had just the castrol on it so thats OK. Its just the top facing surface i am looking for.
Am I correct in saying that the Manx rally only issued doorplates in 1988 - from all the photos i have examined there was no evidence of the usual smaller front and rear plates.
thanks James

The rally plate on the top of the boot its flat on the red bit facing straight towards the back.

On the bonnet and the same size and design as the rear one is on the back n/s corner at an angle.

I have all the photos in scrutineering and later when the Bastos was removed cant do them right now but will post them up later for you.

Three photos that might help you from the 1988 Manx Rally.

The photo with Castrol on the BMW does not show the rally plate on this scan as clearly as it does on the real photo, but the rally plate is still in the same place as the earlier photo. 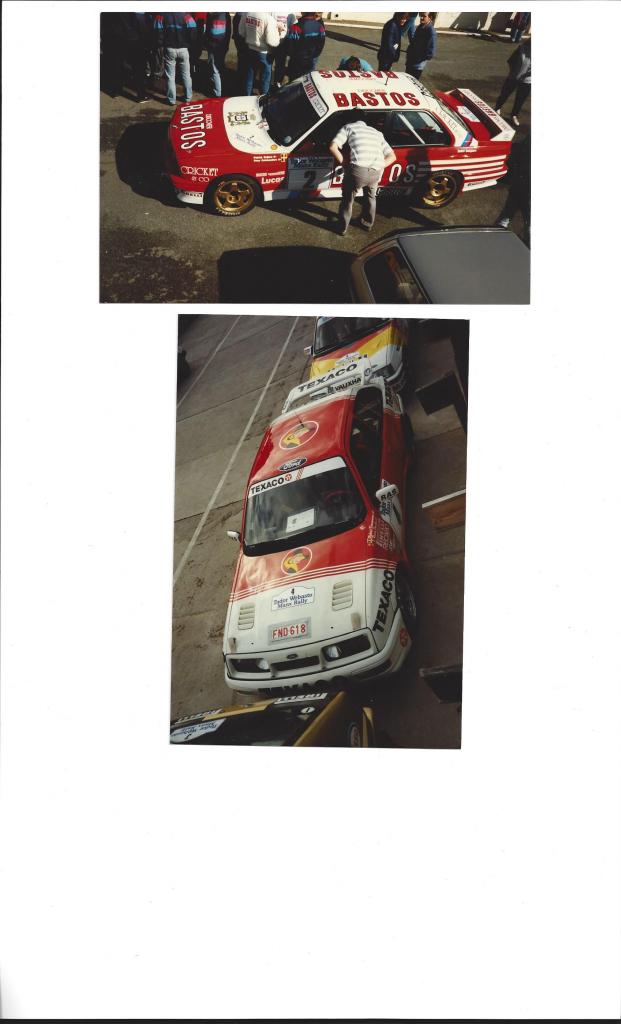 Ooopss two photos the same ballcocks... back in a mo!!

Snyers BMW now with Castrol sponsorship over the Bastos.

This was one of the very best foreign drivers to actually beat and win the Manx. Anyone who saw it in person will never forget his commitment to laying as much rubber down as possible. 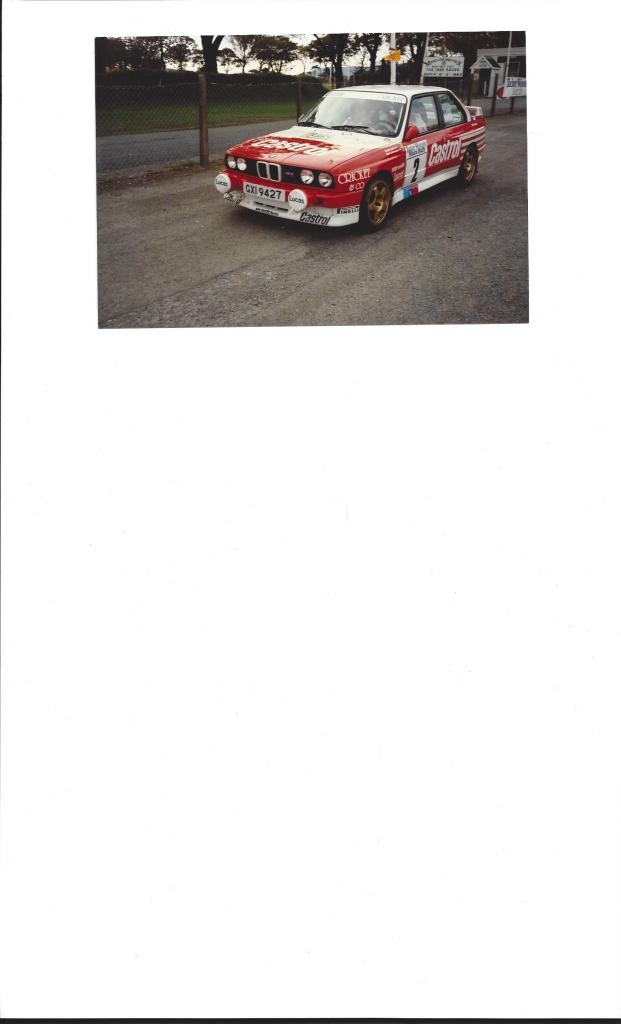 Thanks Chris and Mark. From what I can see they took the Bastos off both sides of the car, the centre of the windscreen strip,the rear boot door,the front bumper,the roof and the bonnet. The crest would appear to have remained on the bonnet and both sides of the rear spoiler. It would stand to reason that Bastos was also removed from the top of the rear spoiler but was it replaced with Castrol or just left white ?

There will be a queue but I would love a model of this car for my Manx collection!!!

I have a feeling that the Rallying4Belgium team were going to do it??

Getting fed up of waiting for various models to get done. Bought the Bastos car in Eifel and looking at conversion. I have someone who may do the decal printing for me and someone else to apply them so it will not be cheap. Hence I need to be sure of what exactly needs to be printed.That was the plan.

I have a photo of Patrick sitting on the car (can't share it on here, I'll mail it to you), and it looks like there's nothing on the rear spoiler.

Thought I had some pictures but they are of his 92 manx seirra.

If you know what you need done James, you can add it in with my artwork when it gets printed. Am hoping to get have stuff getting printed every month now that my printer is back in business
_________________
Always interested in 1/18 Irish Decals/models

Definitely be interested in a set of decals James if possible.  Had a look through my pics from that year, nothing clearly visible of the boot lid.

Any idea what the logo is on the corner of the bonnet? 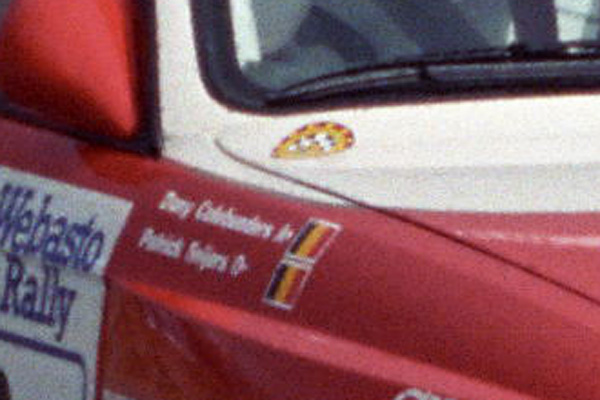 Thanks Juha, noticed it on the IXO model.

Quite a few differences between Manx & Spa car 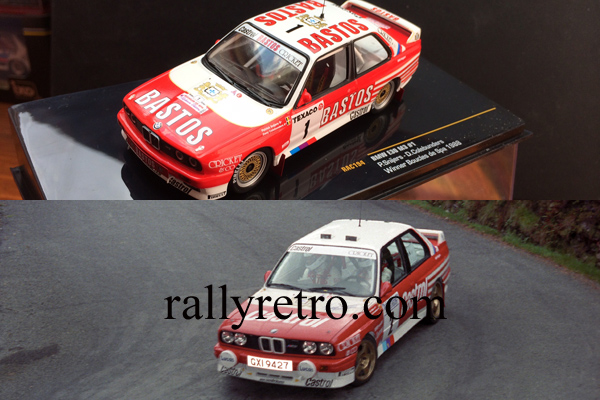 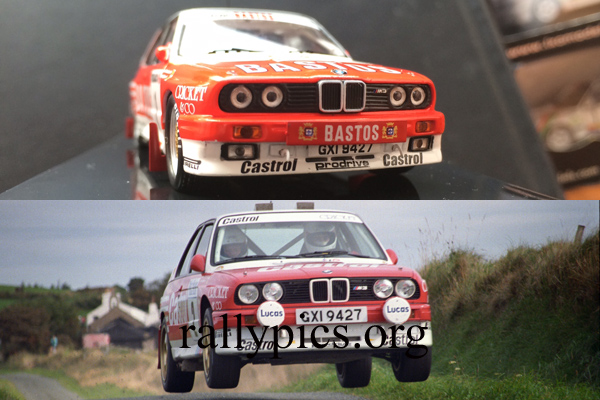 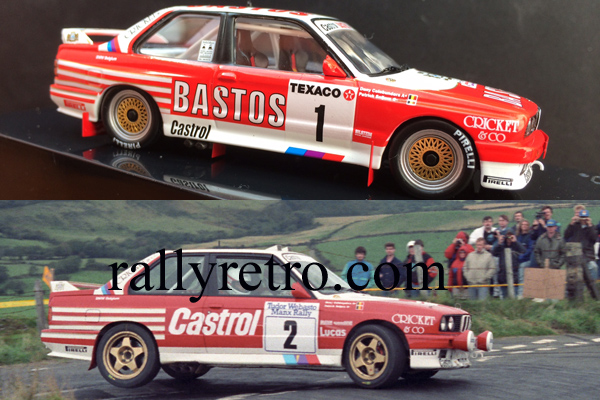 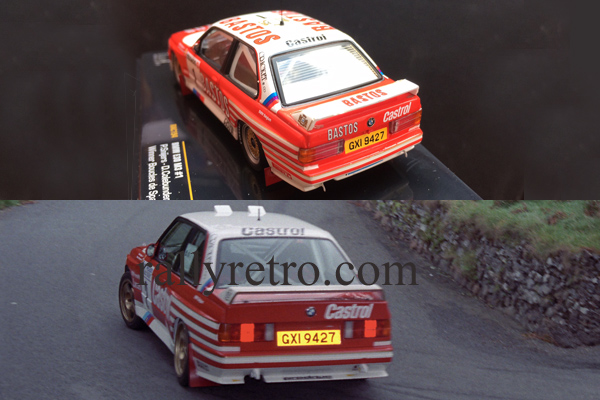 I was looking into converting this one too. It involves a bit of work but nothing major. Just need to find the appropriate lamp pods. I have another pic of the running only one pod, might have lost both at some point during the rally?