I am ploughing on with the Circuit of Ireland display or should I say I am annoying the hell out of those doing the work. Anyways someone has pointed out to me that the Audi Coupe Quattro campaigned by David Llewellyn in 1987 has not been produced as a base model. My knowledge of Audi's would fit on the back of a postage stamp so can any of the Audi experts on here enlighten me please ? Little point in wasting time collecting photos etc if the model can't be produced.

The original you can buy in GT form - Neo and others do it but the Quattro version which was a facelifted version running quattro gear only came about in 1984 and there is only 1 home for that..... read on.....

The Coupé, first displayed at the Paris Salon 1980, featured a similar body shape to the Quattro, but without the knife-edged fender flares of the more expensive car. Mechanically, the biggest changes from the Quattro to the Coupé were the use of a naturally aspirated 1.9 litre carburettor petrol engine, 2.0 litre, 2.1, 2.2, or 2.3 litre fuel injected inline five cylinder engine and a front-wheel drive drivetrain. Some lesser Coupés were also fitted with a 1.8 litre inline four cylinder engine, injected or carburetted, and for the very first year of production a 1.6-litre "YN" 75 PS (55 kW) engine was available.[1] The short-lived 1.6 was the only Coupé not to be fitted with a black rear spoiler.

Facelifted Coupé GT
The updated Coupé, introduced after the German industrial holidays in the autumn of 1984, was given new, slightly sloped radiator grille and headlights, a large wrap-around bumper with integrated spotlights and turn signals, plastic sill covers, and the large rear spoiler from the Audi Quattro. These changes brought the drag coefficient down to 0.36. A new dashboard was also introduced, as was a new interior. GL and standard versions were cancelled for model year 1987 and all FWD Coupés were from then referred to as "Coupé GT".[5]

For the 1986 model year, the Coupés (as with all Audis) were available with more catalyzed engine options. Also, the entire B2 range (Audi 80/90/Coupé) received stainless steel exhausts (for European markets at least).[6]

Also in September 1984, Audi made available the option of the quattro permanent four-wheel drive system to produce the Audi Coupé quattro, a model which was rarer than the turbocharged Quattro model. While most common with the 2.2 litre engine (also 2.3 for the last year, introduced 1987 for the US), in some markets the 1.8 litre four-cylinder models (90 and 112 PS DS/NE/JN or DZ engines) were also available with four-wheel drive.[7][8]

The Coupé and Coupé quattro models appear almost identical from the outside except for a few minor "quattro" specifics. While the GT had "COUPE GT" on the rear side windows, the CQ had the "quattro" decal as used on the Ur-Quattro. Similarly at the rear, the badging was "GT" and "quattro" respectively. The quattro versions also used the Ur-Quattro rear windscreen with "quattro" written into the heater elements (very obviously so on a cold and frosty morning), and the front grille was also adorned with the "quattro" badge from the Ur-Q. Inside, the cabin was identical except that the centre console received a differential lock switch, and LED bargraph displays in place of the GT's three analogue-style gauges. Some Coupé quattros were distinguished by a body-coloured rear spoiler.


Mechanically, the Coupé quattro depended on a combination of components from the GT and the Audi 80 quattro. The quattro permanent four-wheel drive drivetrain was almost identical to that used on the Ur-Quattro - the main differences being the use of the Coupé GT front struts, smaller 256 mm (10 in) diameter front brake disks, and lower ratios in the gearbox and rear differential. The damper and spring rates were also different from the Ur-Q. It was thus largely identical to the Audi 90 quattro and the North American Audi 4000 quattro. Roadwheels were 6.0Jx14", with steel or aluminium alloy rims dependent on the market. 7.0Jx15" Ronals, almost identical to the Ur-Quattro wheels, were also available. The CQ/90Q/4000Q also received their own exhaust manifold and downpipe (5-3-1, while FWD versions were 5-2-1).


With regards to the Facelifted version, you will have to go to your old friends at Realcarmodels in Hungary. I had them build one for me (not the Llewelyn version) for my Nearly But Not Quite WRC collection. 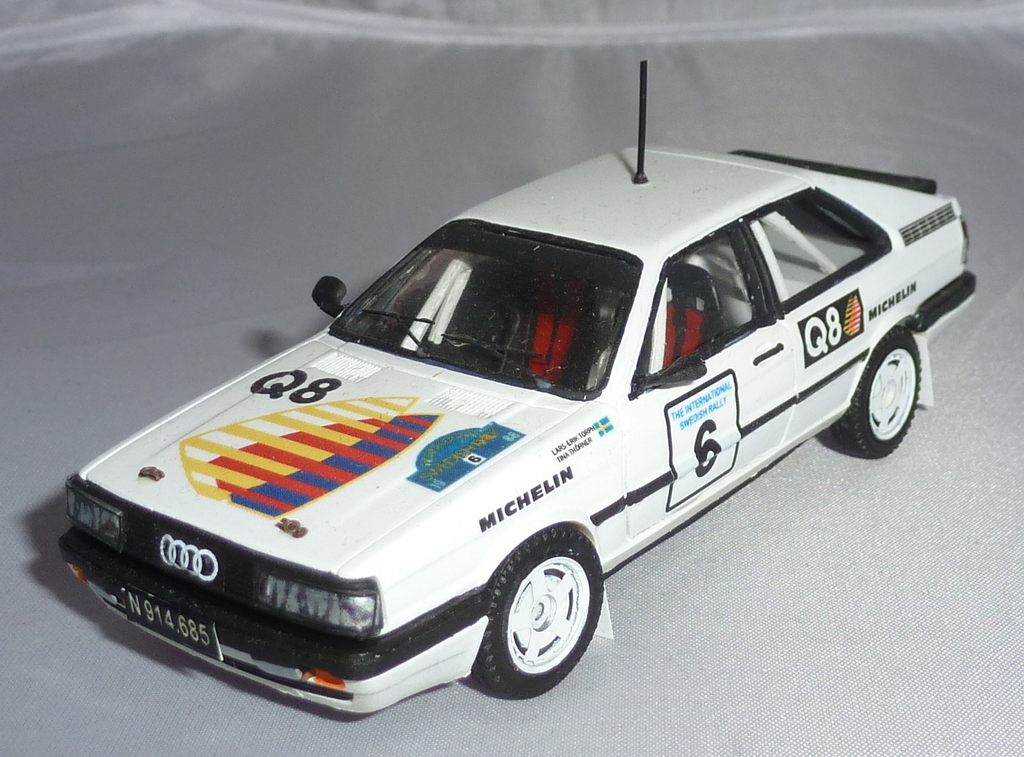 This web site doesn't have a picture of the COI car, but does have a couple of good shots from the 1987 Fram Welsh which may come in handy if you ask Realcarmodels to build you one.

And RallyRetro has 84 photos of the Llewelyn car from the 1987 COI event so you should be alright there!!

Hope this is helpful.

James, unfortunately not. The quattro had blister arches whereas the Group A coupe quattro had normal arches and from memory a different grill and front bumper

Thanks for that. I think this will be one model I will be "parking" .

Just had a somewhat similar problem with finding a 1960's VW Beetle. Most of the models are either 1950's with an oval rear window - some split, some not - or 1980's 1302 type models with the upright headlamps protruding from the bulbous wings. I am looking for a base model with the lights set back into the front wings and a large rear window. I had almost given up until I came across a Cararama and Hongwell diorama with the shape of Beetle I need in it. Its often the most simple of everyday models that can be the most difficult to locate - there are plenty fancy ones but often very few of the "bread and butter" version.

I know what you mean James. If you go on my BRC winners thread in the collection section i think the type you are after is the one i used to build Bill Bengrys 1960 and 1961 championship winning cars

reeft1 wrote:I know what you mean James. If you go on my BRC winners thread in the collection section i think the type you are after is the one i used to build Bill Bengrys 1960 and 1961 championship winning cars

Where did you get the wheels ?

Until seeing Paul's photo I had no idea the Audi coupe GT(b2) was made.

reeft1 wrote:I know what you mean James. If you go on my BRC winners thread in the collection section i think the type you are after is the one i used to build Bill Bengrys 1960 and 1961 championship winning cars

Where did you get the wheels ?

I honestly cant remember James. I have a vague recollection the base model i bought may well have had prise off centre chrome hub caps. Failing that Andy at Rallymodels can source 13" steel escort mexico wheels from Trofeu. If you google 1960 beetle on ebay and open up the settings to worldwide there is something called a volkswagen escarabajo which i think was what i used.

This does not warrant a thread of its own but is some return on the original purchase price !!!

I've looked at this one on and off over the years in 1/43. The die casts that area available are the wrong year and all pre facelift. I have seen the odd resin kit about but very rare. I have the 1987 Shell striped and 88 Gemini liveries its just trying to find a suitable model. I do have an 1/18 Otto Couple GT which was planned to be COI car but its still sitting up there with all the other stuff.