I'm just taking this opportunity to bring you up to date with a few 'recently' completed projects of mine, including... 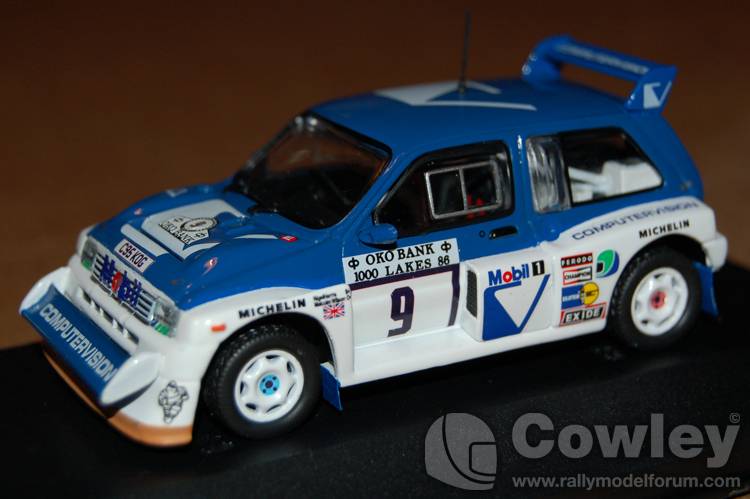 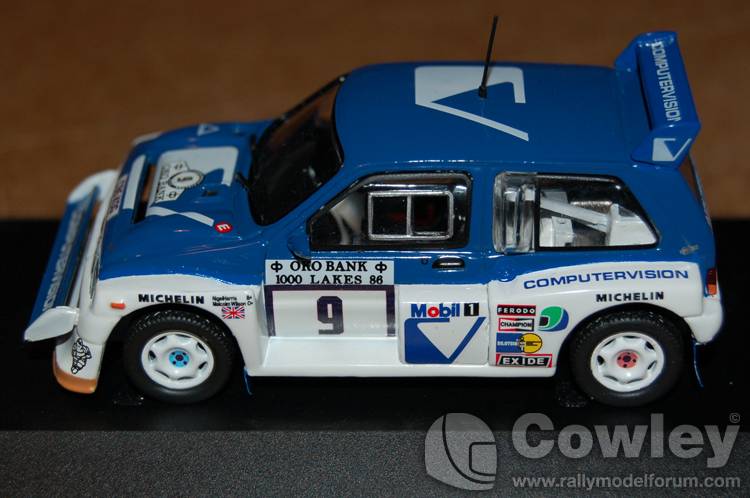 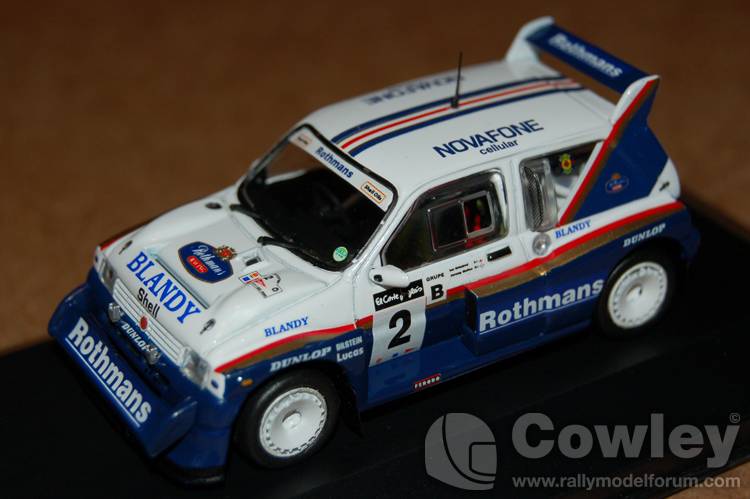 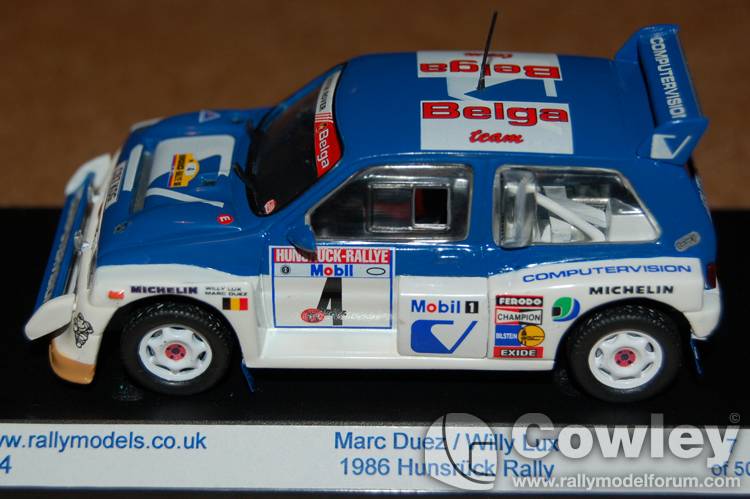 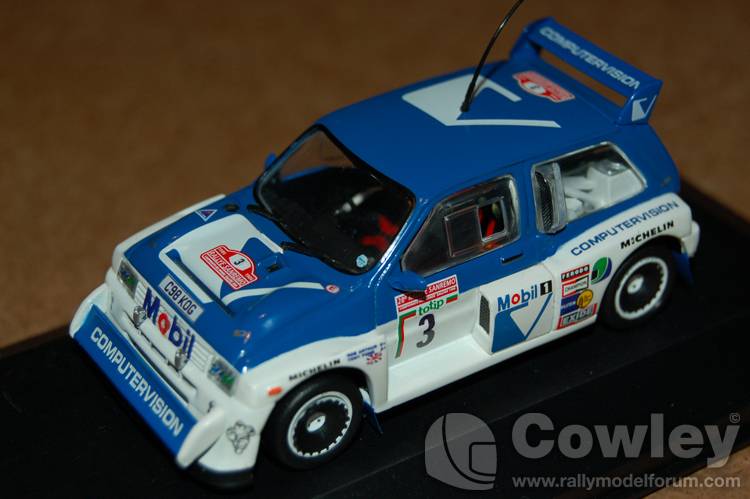 Another personal Code 3 Didier Auriol : 1986 Tour de Corse entry - which I am particularly pleased with, and it's known as Otto's Baby Brother lol!... 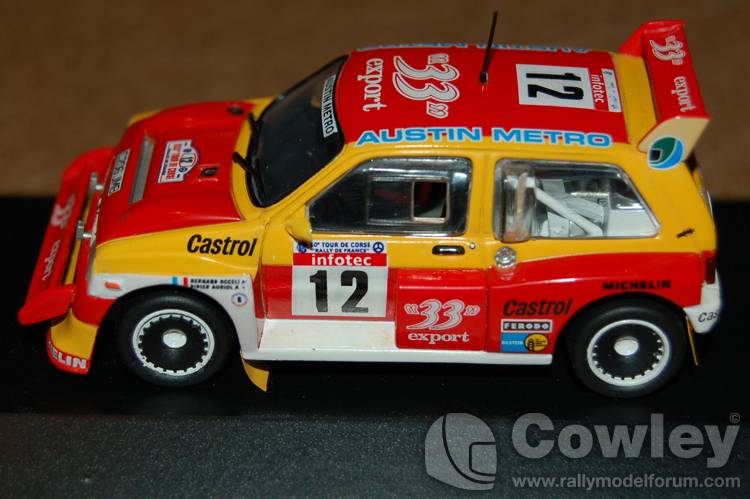 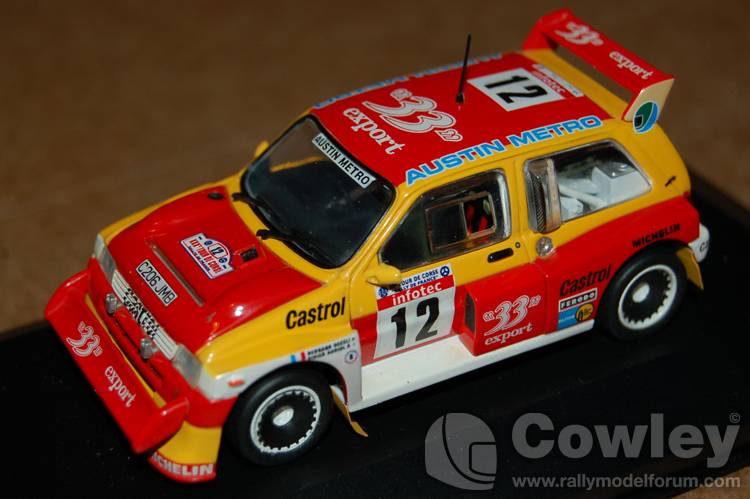 And lastly for the moment, yet another personal Code 3 of the plain white 1985 Knebworth House Press Launch car B196 XUD - a perfect accompaniment to the Rally Models' GB Series 'sister car' B197 XUD that Andy released a while back... 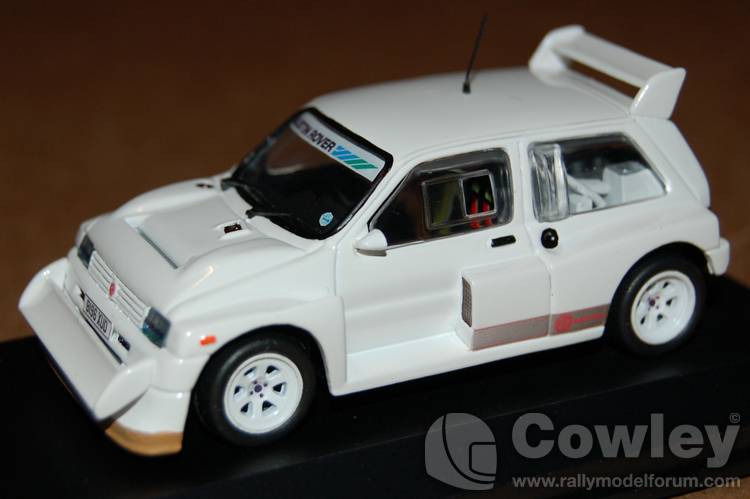 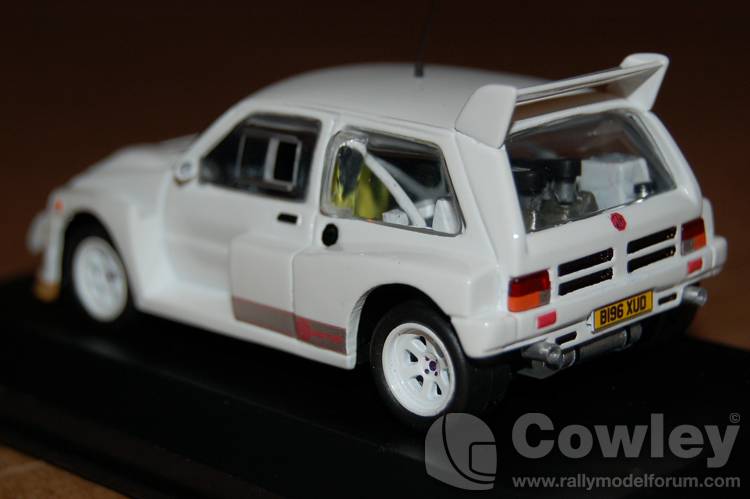 This last one was not only stripped back to bare metal and repainted, but it also features my own decals, and is the first time that I have removed the rear undertray and fabricated the exhaust silencer. I made a couple of attempts at making it, but have now settled on the above version. This will no doubt stand me in good stead for the next time I need to carry out the same mod.

I would be interested to hear your thoughts, criticisms and opinions!

Excellent David, particularly like the added detail on the MW & launch car

Very nice model David.
The last one is the pick for me..Reminds me of photo with the customer cars lined up.

Now there is a thought...All those cars lined up for inspection would make a class diarama....!

Superb. The press launch car looks great. I would like one of those

Many thanks for the kind word chaps -all very much appreciated.

I thought the press launch car would go down well, but it will certainly be easier to fir the exhaust silncer next time now that I know what to do.

CDM wrote:Now there is a thought...All those cars lined up for inspection would make a class diarama....!

Mmmmmmmm, as much as I appreciate your suggestion for a diorama Chris, I don't think I'll bother mate!

Ok we will let you off.

But some excellent additions to your 6R4 collection. I guess it would be possible to do all the 6R4s that appeared on the World Championship? That would be a hell of a project.

Another interesting theme would be to find a chassis that has appeared in the most liveries.

Like a lot the 1985 Knebworth House Press Launch . The work in the exausts is great. Good job.

Many thanks Chris & George - your kind words are appreciated for sure.

Nice ideas Chris, and that is part of the 'big master plan' - to produce all of the WRC 6R4 entries. Zeus is a lot further advanced than I am I reckon, but my tally is currently...

We're getting there slowly!

Group B Models wrote:Like a lot the 1985 Knebworth House Press Launch . The work in the exausts is great. Good job.

Thank you Vitor - that means a lot.

The exhaust pipes were made from 2mm alloy tubing, which I drilled out the inside with a 1.5mm twist drill to make the wall of the pipes thinner. These then fit neatly over the black plastic 'stumps' sticking out the back of the car on the cheaper Altaya base model.

The exhaust silencer was made from Evergreen round plastic rod - but I cannot recall the diameter at the moment! - which was then filed flat on one edge so that it would glue nicely to the underside of the black plastic rear floor. Two bands of paper were then wrapped around the silencer to represent the metal bands around it. You can't really see it from the photo above, but I also made the rear lower framework from 1mm Evergreen square plastic rod.

I hope that helps.

Congrats, lots of fine effort and attention to detail. Me likes!

Is there any chance of showing (off) the rear of the Knebworth launch car in another photo, particularly considering the extra efforts you've made at the back there?

I'd like to have a go at this myself, but given I'm currently working my way through seven lots of decals I already have and have four more rallycross liveries in mind (at last count: Gollop 'MobilMetro', Barry Hathaway, Lawrence Gibson and Dermott Carnegie) it might take a while. 6R4 count is currently at 33!

Do we know if the Bogie car (you know the one that went for £322 + P&P on eBay recently) was bought by a member here? Would be neat to have kept it 'in the family'!

Absolutely fantastic work there David! Top stuff! Love the extra attention to detail on the exhaust and tail pipes etc, its the little touches I think that make the difference between a good model, and an exceptional model.

Cant wait to see what additions you have in the pipeline mate, its looking like a great year for collectors of 1/43 Metro 6R4 models

Many thanks for the kind words Steve!

Now that it's temporarily stopped raining.....

I'll take a couple of photos of the lower back end of the white Knebworth Launch car for you to in better detail and in daylight. All of the photos above were taken indoors with flash, and models always look so much nicer when naturally lit without the flash. Leave it with me and I'll get them uploaded later on mate - all being well....

You're working your way through seven sets of decals - you poor thing!

- I've got almost TWO DOZEN of sets to work through!

I do not know who bought the Bogie ebay car Steve. Mark would be the only person who'd know as he was the seller.

I certainly try and get the models as accurate as possible if I can. If a job's worth doing it's worth doing right mate - which sounds like your own attitude as well based on your Sanyo decal project, and how particular you are on getting the detail right.


Do we know if the Bogie car (you know the one that went for £322 + P&P on eBay recently) was bought by a member here? Would be neat to have kept it 'in the family'!

Its not even been paid for Steve so I have reported the buyer as they have had a week to pay and shouldnt of bidded if they knew they couldnt pay for it
I have things to buy too and pay for them so the buyer either pays up or I will be seeking the £32.00 sellers fee back for the inconvenience and I aint bothered if the person is a member or not.

Launch car is great, even down to the mirrors

Did you think I wouldnt notice

Where did you source them from??

The mirrors came from a spare Starter resin kit mate - either Belga or Clarion I can't remember. Even though the International vented mirrors were included on the resin bodyshell, they also gave you these spare 'bullet' mirrors for greater accuracy. Which was nice....

I'm working on my Duez Sanremo car now, which will complete that event's three entries, but then I'll get on with completing my Portugal entries -which I know you already have sorted. The 'mammoth' 1986 RAC can wait a bit lol!

Must be the Belga as my Clarion doesn't have them with it. Cant wait to see your 3 Sanremo entries. I stll need to souce my TdC event plates...slacking

I'll get around to building those myself when my college work is done. Whats the total of unique models now??

Yeah it must be the Clarion one then Dave, although I do think that parts and castings differed over the years. Originally the splitter and diffuser sides were brass - later ones were black plastic. Anyway, at least you now know where I got the mirrors from...

As soon as I've finished the Duez 86 Sanremo car, I'll take some photos of it alone, but then also as the three-car entry for this one event - as I will do for Corsica now that I have made Didier's car finished. Carlos Lopes does (or did?) the decals for Corsica mate, they're Chatriot Maxi 5 decals - but I only used the Corsica event plates as the rest is of no use!

Here's a couple more photos of the plain white 1985 Knebworth House Press Launch car for you Steve - and anyone else that's interested! - and it shows the exhausts and rear lower framework in a little better detail. They're not perfect by any stretch of the imagination, as the silencer is a little too low for a start! However, the offset to the kerbside is about right I reckon. Ideally, I'd like to have the exhaust pipes curving out of each end of the silencer as it really should be, but on this occasion I used the position of the tailpipes as per the original model - which are a little too high. Is this man never satisfied? 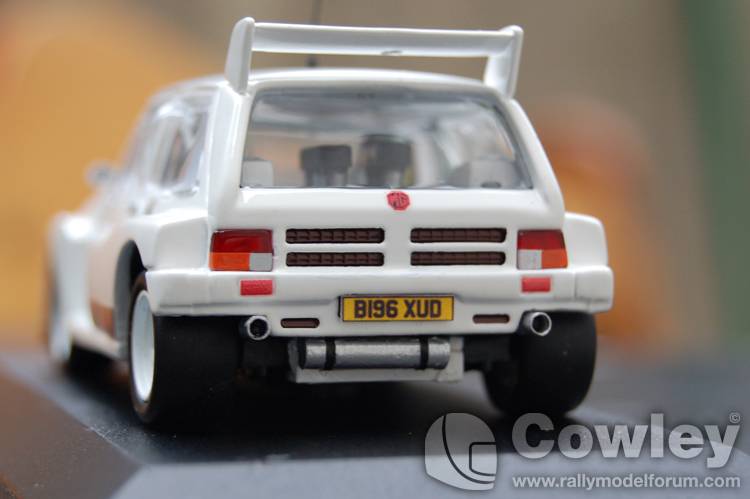 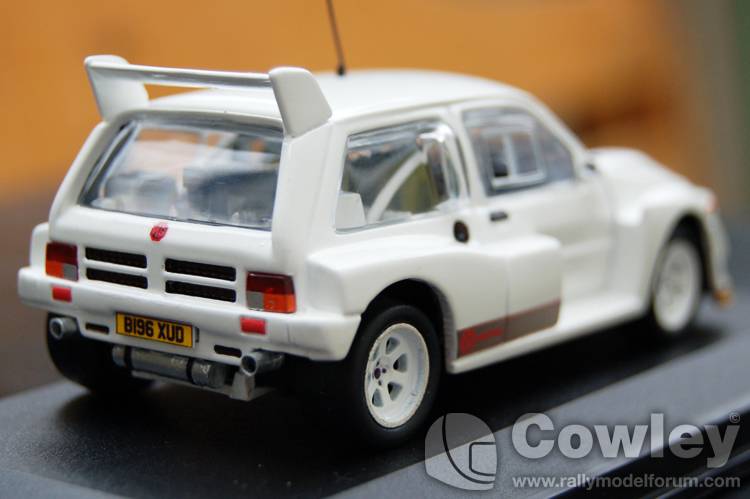 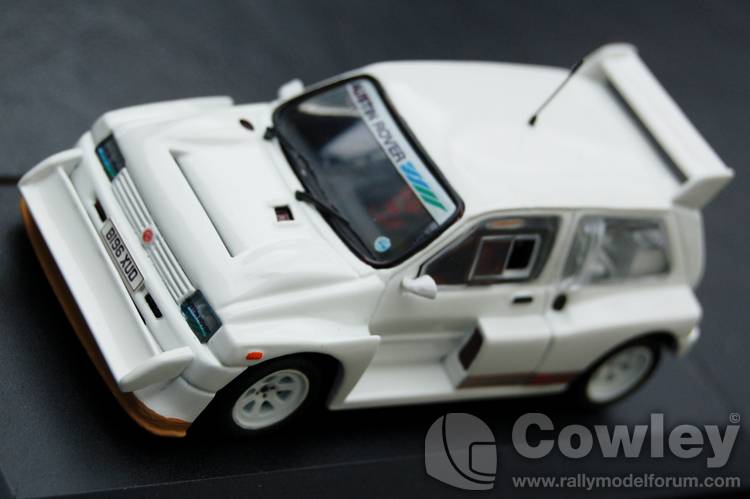 I haven't got a clue about my total number of 'unique' 6R4 models at the moment Dave, but I still think you're ahead in the big scheme of things - maybe only just though....