Hope this works as I am still using the Photobucket link.

You will all have seen this kit released a few years ago the 1:24 scale plastic kit of the Subaru Rally Truck and Trailer with a Subaru Impreza. I was asked to build this last January and I had worked on it on and off until July when I needed it out of the way. It has taken the best part of the last two months to complete.

This was a catalogue of disasters and frustrations right from the start.

The trailer is nearly 2 foot long. The sides, roof and floor were in two parts, butt jointed together. Well how was that ever going to work? There was so much flex in the long part that it was always going to crack along the join. Trying to join up the four long parts to make the box and keep them all in a line, was very difficult. Spraying the roof part out in the garden in the nice sunshine, I just get to the end of the second coat of lacquer when out of the whole garden area to moths appear and land upside down in the lacquer!!

The chassis could have been better thought out. Things you do right at the start only came to light as being not quite right, right at the end. The chassis was in about 6 parts, this really needed to be in one piece as it takes all the weight of the model. Most of the items stuck to the chassis rails had no fixing pins to hold them, so how do you stop them falling off again?

The cab was the biggest nightmare. The hinge system to tilt the cab was just too weak to take the weight. In the end I worked out a system to lift the cab off. All the aero on the back and the sun visor have no fixing pins. They are all butt fitted. Same with the roof aero very delicate and no fixing holes.

Did I mention the decals falling to bits....

It was fairly clear that some of the colour instructions were not for this model eg yellow dashboard and sun visor. We had the correct Subaru blue which then unfortunately ran out after the car and cab were completed. The new cans from the Prodrive Subaru paint supplier were slightly darker!!!
It is quite the most over complicated model I have ever done, not helped by the fact I don’t know one end of a truck from the other. I lost interest in it so many times, so many set backs, it’s not one of my best models.

I bet there are not many of these kits that have ever been finished or if they have not fallen to bits since!! Fortunately, the customer has been very good about all the issues. I deliver it to him on Saturday. Let’s hope I don’t drop it again!!

I don’t ever want to see one of these kits ever again and I am not ever ever ever going to build another one ever….…I must get another beer and find a dark room……. 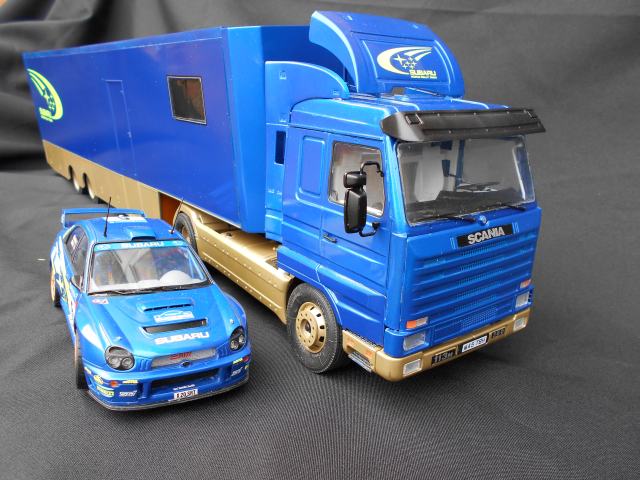 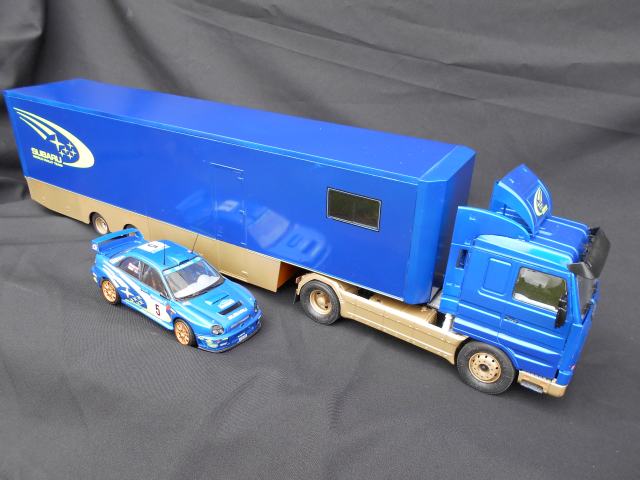 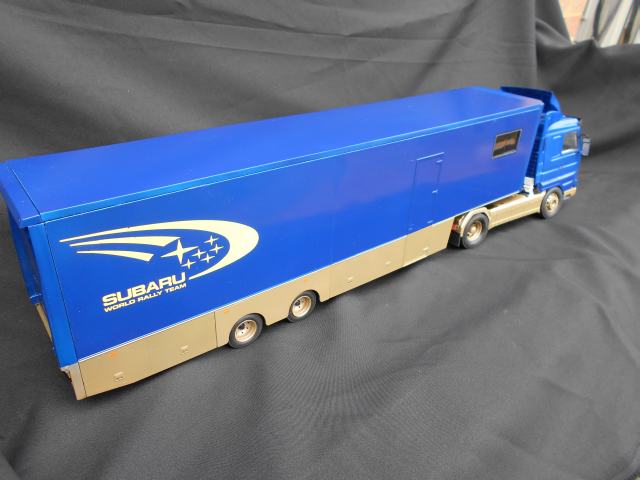 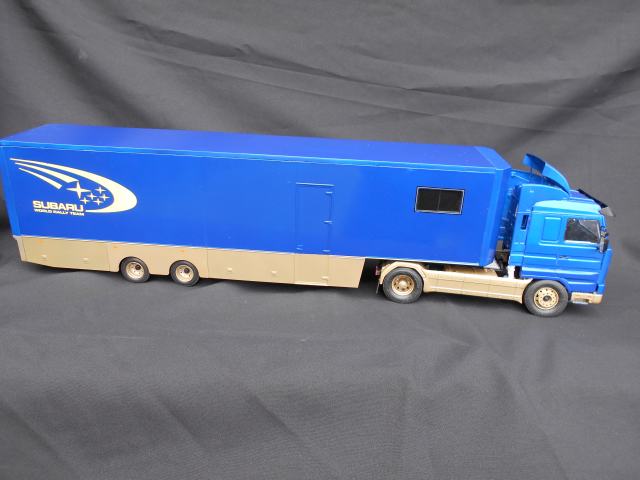 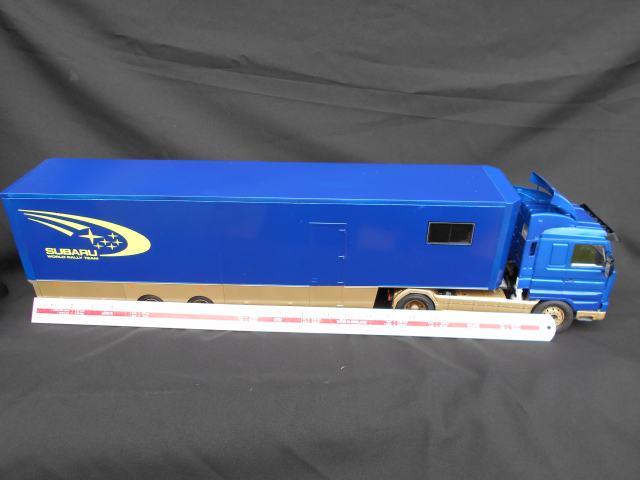 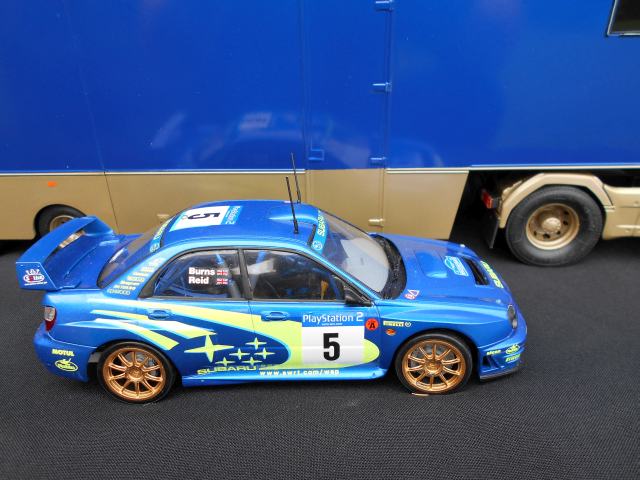 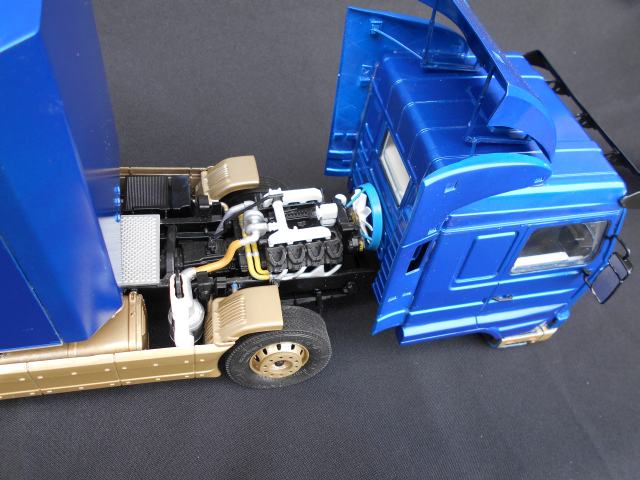 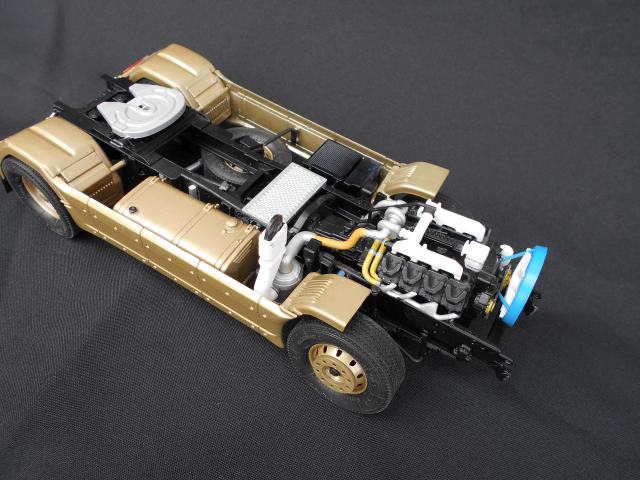 The end result looks well though Chris, well done for sticking with it, I've this kit in my stash but I'll likely never build it now after reading this!

so as you're an old hand at this now, can members feel free to buy the kit and post it off to you for assembly and painting?

No I am never ever going to build another one, ever!!!! Pass me another beer quick...

If you anyone wants to give it ago there was one posted on ebay today...but dont involve me....

I like it alot Chris. Well done for taking it on and doing an excellent job.

lol ok chris hint taken..
anyway, well done m8 for sticking at it and producing a fine looking set up....

lots of hard work went into putting this togather after that read chris, but the end result looks great!
can I ask what type of glue you used to glue it altogather?
eamon

Great work CD, I always wanted that setup but in 1/43. Is the Impreza Tamiya or Italeri?

The cars is actually a Tamiya. That was fairly straightforward I have done a few of them.


Just back from delivering the whole lot. Customer very happy, lets hope he gets it all back ghome OK?
Chris

Superb effort. Well done for sticking with it!